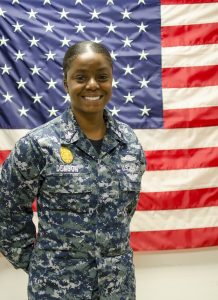 A 2000 Grace Christian Academy graduate and Bainbridge, Georgia native is a part of a Navy team supporting the cyclone-class coastal patrol ships patrolling one the world’s most volatile maritime regions.

Petty Officer 1st Class Shalonda Denson is a master-at-arms supporting the Manama, Bahrain-based squadron of four coastal patrol ships forward-deployed to the Arabian Gulf in the U.S. Navy’s 5th Fleet. The Navy’s 5th Fleet area of responsibility encompasses about 2.5 million square miles of water area and includes the Arabian Gulf, Gulf of Oman, Red Sea and parts of the Indian Ocean. This expanse comprised of 20 countries, includes three critical choke points at the Strait of Hormuz, the Suez Canal and the Strait of Bab al Mandeb at the southern tip of Yemen.

Denson is receiving firsthand experience working in a foreign country and obtaining unique qualifications not possible with larger commands. Flexibility is paramount.

“We’re law enforcement for the Navy. We also do harbor patrol, are involved with anti terrorism activity, and protective services,” said Denson. “The camaraderie within my rate and with the people in the command is great.”

The coastal patrol ships are perfectly suited for the complex waters of the Arabian Gulf, where over 80 percent of maritime security operations take place in less than 39 feet of water. Its light tonnage, powerful propulsion plants and shallow draft mean it can move nimbly in crowded coastal waters. This platform is also used to escort larger ships such as aircraft carriers, protect infrastructure like oil platforms and distilling platforms and frequently participates in exercises with regional allies.

Denson realizes the significance of serving her country abroad and is very proud of the work she is doing as part of the coastal patrol squadron, helping protect America on the world’s oceans.

All the officers and sailors there allow the fleet to increase its forward presence, improving the ability of the Navy to be where it matters, when it matters.

“This is a very challenging job,” said Denson. “I’m the only master-at-arms here and I supervise all anti-terrorism and force protection for 14 ships. Originally I joined the Navy to get an education, but now being in the Navy assures myself a good future and more education. I also get to travel and see the world.”