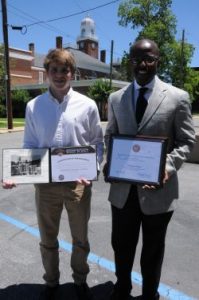 After years of commitment to his soccer team, band, youth choir, cross country team, praise band and Eagle Scout troupe, 18-year-old Nathaniel Lambert is now devoting his time to preparing for his upcoming year at the West Point military academy.

“Both his dad and I are really excited about it,” Cox said. “But, it’s one of those places you have to go for yourself. You can’t do it because someone else wants you to.”

Lambert proved his dedication to the program through the rigorous application process. Students are required to apply through the Congressman’s office, where they compete for a nomination and spot in the program.

The students are based off a whole candidate score. They look at physical stamina, leadership ability, and academic achievement. They also undergo multiple physical tests and medical examinations.

During the process, Lambert applied for interviews along with several hundred other students with the two senators. He was one of 26 students to receive an interview with Georgia Senator David Perdue, but unfortunately was not given a nomination. Congressman Sanford Bishop, however, did appoint Lambert.

Bishop appointing Lambert only carried out a further legacy. He is now the third generation to be appointed from the 2nd Congressional district.

“I’m very proud of Nathaniel’s work,” Lambert Jr. said. “I’m glad he’s following in the footsteps of his great- grandfather, grandfather and I.”

Lambert Sr. agreed, “I’m very proud he was selected to continue this service. I’m lucky I was able to observe and watch this outstanding young man grow all his life.”

Lambert said he is excited about his acceptance, but did not see it coming. He felt relieved when the process was over. He said he now looks forward to meeting new people and getting to live in a cooler place.

While Lambert is undecided on what he will study, Cox said she believes it will be something in mathematics or engineering.

Lambert said not many people from around the Bainbridge area apply for West Point, but it is a great school and people should take advantage of the opportunity.

Lambert will soon begin summer training and enroll in West Point’s four-year program. Upon graduation, he will spend five years as an active duty officer and one year in the reserve.