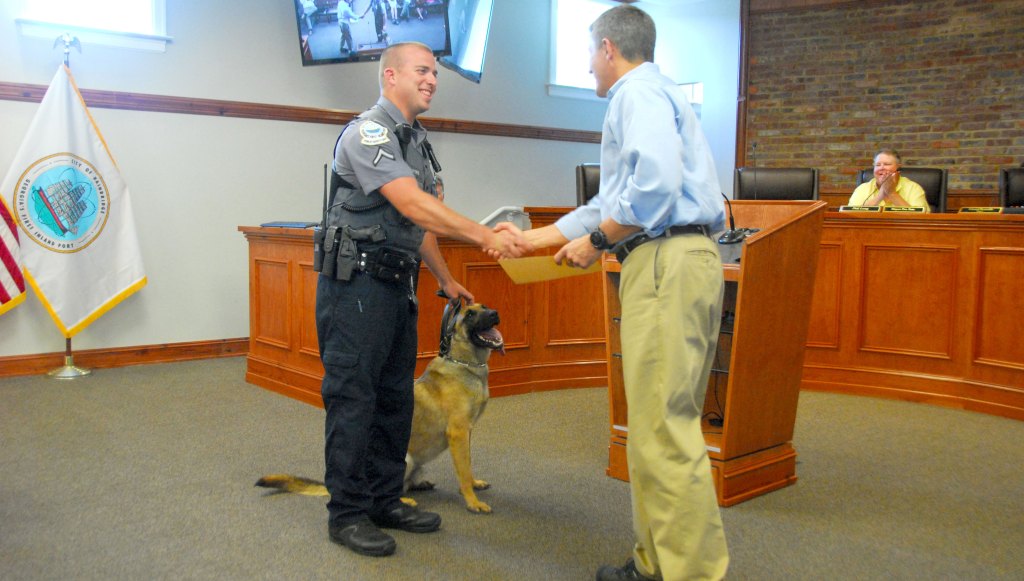 The truck, carrying two vehicles in its bed, had a defective tail light. When Myers approached the driver to tell him, he could feel something was off. Suspecting criminal activity, Myers asked if he could search the vehicles. The driver refused.

So Myers called on his partner waiting in the car.

Out he came on his four legs, tail wagging.

Kenzo, a German Shepherd Belgian Malinois mix, sniffed around the truck for a minute and then gave a signal. Myers was right, something was up. After conducting a search of the semi-truck and the two vehicles it was carrying, Myers found a scale, some plastic baggies and brown box. Inside was approximately half a pound of marijuana.

It was Kenzo’s first bust.

Tuesday, The City of Bainbridge swore Kenzo in as an official member of Bainbridge Public Safety. Myers and Kenzo sleep, eat, ride and make arrests together. The one-and-a-half-year-old dog became officially certified last week after four weeks training with his new partner and friend.

“Week one, it’s crazy, because it was like bam, me and him clicked together,” Myers said. “We were tight knit and we just went to work. It was fun training. After our first week I was like, yeah, me and him are going to be good together.”

The City of Bainbridge purchased Kenzo from South Georgia Canines in Dooly County. He was imported from Holland and knows commands in English and Dutch. He is trained to detect controlled substances, just like he did on Sunday. Kenzo can also track humans.

“So if we have someone running from us or missing or endangered people, we can track them,” Myers said.