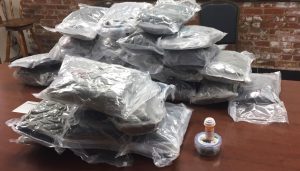 John Bevilacqua of Columbus, Ohio, was traveling south when he passed through Bainbridge on Wednesday. BPSO Myers noticed the vehicle, a rental SUV, violate a traffic law so he followed the vehicle to a safe area and initiated a routine stop.

After talking to the driver, Myers noticed nervous behavior from Bevilacqua.

“I noticed he was nervous, his hands were shaking,” said Myers. “I could smell the odor of marijuana coming from the vehicle.”

The marijuana was sealed in duffle bags and suitcases according to Myers. Bevilacqua is now in custody and await bond for three charges. Bevilacqua is charged with failure to maintain lane, possession of a schedule two controlled substance, and trafficking marijuana.