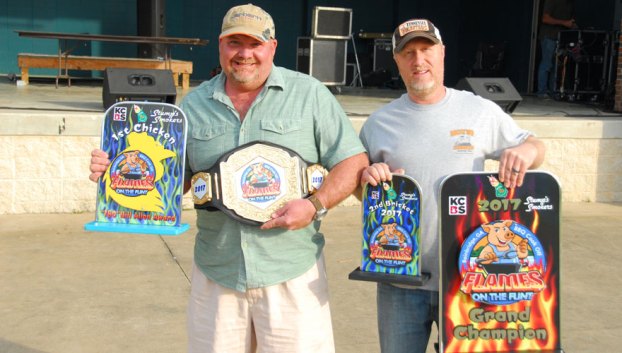 Travis Bragg and Walt Moulton of team Rocky Top BBQ hold up their awards at the end of Flames on the Flint last Saturday.

Sixty-seven teams fired up their smokers and competed in the fourth annual Flames on the Flint BBQ Cook Off this past weekend at the Earle May Boat Basin. With $50,000 and a championship belt on the line, the competition drew teams from across the country.

It was the team from Jonesborough, Tennessee, that came out on top, though. Walt Moulton and Travis Bragg of Rocky Top BBQ narrowly defeated Bootyque to win the grand championship and a $10,000 check.

“We came in here, got all our meat prepped and everything went smooth,” Moulton said. “When it was coming off the smoker today we were excited, but when you like your food usually it doesn’t go this way. Everything worked well and we had a lot of luck on our side.”

“My chicken is always pretty good and it was good today,” Moulton said. “I do a thigh and trim them down and cook it in butter. When we got a first place chicken and then we got a brisket, I knew we had a good shot.”

Moulton and his team have been cooking for six years, but this was their first trip to Bainbridge for Flames on the Flint. He said it was the money and desire to get an early start on the season that brought him to town.

“I usually don’t start ‘til April, May cooking, and I wanted to get out a little bit earlier this year and thought we’d come down,” Moulton said. “It is a good contest, especially because I won. Even if I didn’t win, I would still come back. It is a good contest. A lot of money, good facilities, power, water.”

The top place in pork was claimed by Smoke Central BBQ. Victory Smokers came in second in the category and Chix Swine and Bovine BBQ came in third.

Smoke Central was cooking in a drummer smoker for the first time, which he says gives the meat a slightly different flavor.

“It is hot and fast so a little different flavor profile to it,” head cook Jason Singletary said. “ It gives you an open pit flavor, more of grill flavor than a smoke flavor.”

Sweet Smoke Q won the brisket category with a near perfect 179.44, the highest score in any of the four categories.

“I’ve been cooking good brisket lately and today was really good too,” head cook Jim Elser said. “When I didn’t get called up with the first nine I was scratching my head a little bit thinking it was a good brisket, but when they called my name it deserved it.”

“I know I’ll come back next year, gnats and all,” head cook Bobby Lankford said.

The fifth annual Flames on the Flint competition will be held at the Earle May Boat Basin on March 9-10, 2018.

Bill could mandate 30-minutes of recess across Ga. elementary schools

On Friday, the Georgia House of Representatives passed HB 273 by a vote of 147-17. The bill, which was authored... read more