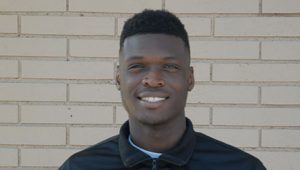 Rayneau Victor, a senior at Bainbridge High School, has been selected as one of 100 students nationwide, to attend Disney Dream Academy for four days in March.

This is the tenth year the event has been held at the Disney resort in Orlando. It consists of motivational workshops on how to achieve personal goals. Oh, and in addition to staying in the park, participants get to ride the rides and take in all the sights and experiences.

Rayneau is understandably very excited to be going. He was inspired by a teacher to submit an application, which consisted of having to write three essays.

His first was about the story of his life. His mother and father came to this country to escape the poverty in Haiti. At first they worked the fields, but pursued their own education, becoming CNAs in the medical field. His mother now works in the contracting process between farmers and field workers. He recognizes that poverty pushed him to succeed academically. He currently ranks number four in a class of 300. He plays goalie on the soccer team, is a member of the Quiz bowl, Chess Club and Student Council.

His second essay covered his passion in life—what he wants to be. He plans to become a pastor and motivational speaker. “That is where my heart is. I like the ministry, serving and praying for others. I know that God is calling me to be in the ministry,” he proclaims.

Rayneau attends church at Ephesus LDS Church, where he sings in the choir.

The third essay is about who inspired him to set goals and succeed. Again, it is the story of his parents, both of whom entered America legally looking for a better life. Their pursuit of education made it possible.