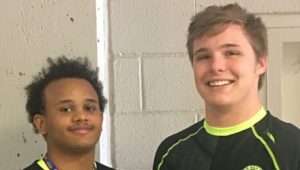 Tre’ Storey and Ryan Adams joined an exclusive club in the history of Bainbridge High School sports on Saturday, becoming only the fourth and fifth wrestlers in school history to place in the state tournament. Storey placed fifth overall in the AAAAA- 195-pound weight class and Adams finished third in the AAAAA- 285-pound class.

“It was really exciting,” Adams said of the moment he pinned his opponent for third place. “I jumped up in the air and went and hugged [Coach Chad Smith]. I was just so excited.”

Storey added “It felt good because it had been a long time in Bainbridge history since anybody placed at state… All I could do was smile to know that I finished fifth. It was an amazing feeling.”

Adam’s season was not without adversity. He had to wait until January to be cleared by doctors to return from a major knee injury suffered during football season.

“When I had my doctor’s appointment, I knew I had to get cleared now or it was never,” Adams said. “When he finally cleared me, and I begged and begged him, and I finally got to come out to practice, it was like the light cut on.”

He entered the tournament with high expectations after winning the region championship and his sectional tournament. In his first match, he pinned his opponent in the second round and he advanced to the state semifinals by pinning his quarterfinal opponent.

He then faced a tough test in the state semifinals against a wrestler that had placed last season and fell just short, losing 3-2.

“There were 30 seconds left, I put him in a cradle,” Adams said. “It took me forever to get him back. Once I finally got him back, there were 15-seconds left. As soon as his back hit he got out of the cradle and I couldn’t get him in another one. If I had held that cradle for two more seconds, I would have won.”

He didn’t let the loss deter him though and he defeated his opponent 4-2 in the consolation semifinals to advance to the match for third place.

“When I got back in the third place match, the guy I was wrestling was the guy I messed up against in sectionals,” Adams said. “I beat him, but it caused a big argument between the officials and the coaches.”

He did not leave room for controversy this time around, pinning his opponent in 2 minutes and 37 seconds to claim third place.

“Before I went out there, my coach told me that it is all or nothing,” Storey said. “It all depends on how much I want it. I wanted to wrestle. I didn’t want to go home so early. I went out there and did everything that I had to do and I came away with the win.”

In the semis he was forced to fight through a pulled pectoral muscle that he suffered early in the match and he lost 11-6. He didn’t allow the injury to hold him back on Saturday, and he defeated his opponent 10-6 to finish fifth in the tournament.

His plan now is to use this year’s experience to help him prepare to make a run at the state championship next season.

“The experience is going to help me out a lot to know what I have to do in order to win state. I need to start preparing for it now,” he said.

Smith said that this year they will have a summer program for the first time. The goal will be to work with Storey throughout the next year to help him shed body fat and gain muscle so that he can stay at 195-pounds next year and compete for a state title.

For now though, they plan to bask in their accomplishments at state.

“It was a good experience and the pinnacle of my coaching career so far,” Smith said. “For it to be Ryan and Tre’, two kids that I have literally took into my home, and they have stayed and ate and played with my daughter and are friends with my wife. I couldn’t have hoped for a better two kids for it to happen to.”

Bearcats qualify for region with win over TCC