Bearcats qualify for region with win over TCC 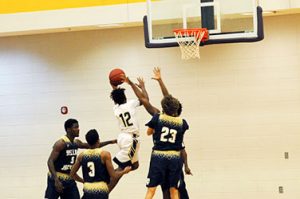 The Bainbridge Bearcats beat Thomas County Central 67-38 Tuesday and locked up the four seed spot in the Region 1-AAAAA Tournament in Warner Robins.

Bainbridge played Warner Robins at 8:30 p.m. Friday night in the first round of the tournament. The Bearcats did not tip off before press time for this edition.

The play-in game, played to determine the region’s four seed, did not have many fans in the stands at the BHS Gym, creating a quieter atmosphere than most other games this season.

The first quarter was back and forth for both team, but Bainbridge finally pulled ahead with big scores and a stingy defense in the second quarter.

“We started off slow,” Coach Terry Smith said. “They outscored us in the first quarter 13-10, so it didn’t start out well, but in the second quarter they jump started it.”

Bainbridge roared to life and poured in 23 points and held TCC to 5 to gain a 33-18 halftime lead. Smith credits a lot of the effort to Bryce Jones and Deunta Gardner.

“We had two guys, Jones and Gardner, they pretty much are by far two of the better defenders in our program and made a big impact,” Smith said.

Bainbridge added another 18 points in the third quarter and topped off the fourth quarter with 16 points, holding the Yellow Jackets to 20 points in the last 16 minutes.

Maleke Lurry had a double-double for Bainbridge, adding 15 points to the board and pulling down 10 rebounds.

Milton Gayle and Jeremy Freeman were also in double digits scoring, throwing in 18 and 12 points respectively.

Jeremiah Davis hit the lone 3-pointer of the evening for the Bearcats.