By the numbers: BPS and DCSO report 2016 crime statistics 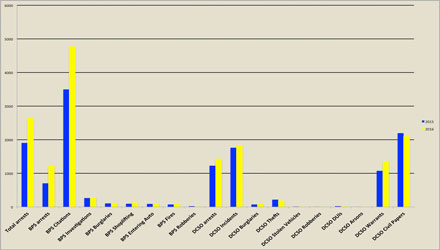 “Our staffing was short in ’15,” Green said. “We were at minimal staffing and we were being reactive to every thing we were doing versus proactive because of our manpower. We are still understaffed, but when you have more people out there working they end up making more cases and arrests.”

The biggest increase came in traffic citation. In 2015 BPS issued 3,495 citations. That number jumped to 4,777 in 2016.  Green said this increase also played a large role in the increased arrests.

“If they are out there stopping vehicles for traffic violations more frequently there could be an arrest for a suspended license or driver under the influence,” Green said.

In 2016, there were 118 burglaries reported, 128 shoplifting cases, 97 auto break-ins and seven robberies. BPS also opened 283 criminal investigations. In 2016 there were no murders within the city limits. Green said this is in part because they were proactive about diffusing situations before they could escalate into serious incidents.

“It seemed like in the last 12 months, there has been a lot of fighting in the city in the streets,” he said. “We have been trying to be real proactive and arrest them for affray, because we don’t want to get to the level where they is a felony assault that would lead to a death…as far as violent crimes being less, it was a good year for us.”

Their plan for the next is to continue to be proactive with the increased staff.

“We will probably have more road checks this year,” Green said. “We definitely want to discourage driving under the influence in the city.”

BPS is also planning to be more active policing traffic in the morning as students commute to school.

“We are trying to be proactive around the high school and the young immature drivers,” Green said. “That has been one of our major concerns because every year we have accidents on 84.”

Chief Deputy Wendell Cofer said that while the number of incident hasn’t increased much, the amount of work required to successfully prosecute cases has.

“The complexity of what the court system requires for a successful prosecution, for all law enforcement agencies, has changes dramatically in my opinion,” Cofer said. “The court systems and juries require so much more now that it taxes what used fairly simple routine cases and turns them into marathons.”

Cofer said that the plan in 2017 is to continue to work on preventing crimes before they happen through community education and neighborhood watch.

Cofer added that for the last few years they have been very reactive and only answer 911 calls, because it is all they had time and the staff to do. In 2016, due staffing levels increasing, they plan start doing neighborhood patrols again.