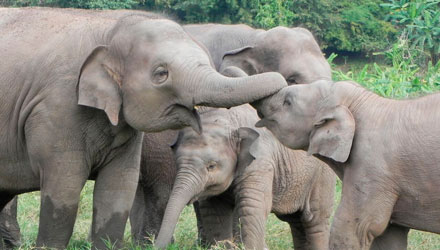 It took two years of searching, but Carol Buckley and Elephant Aid International were finally able to find the perfect piece of property for her planned Elephant Refuge North America. She had a long list of requirements including diverse habitats, a mix of forests and pastureland, multiple waterways and an average low temperature in winter that is greater than 40-degrees.

She searched through Alabama, Mississippi and Georgia before finding the perfect place, an 850-acre plot of land in Attapulgus.

“After two years of searching, this piece of property not only met every other criteria on my long, long list, it also had that temperature that I had not found anywhere else,” Buckley said. “Unless, if I went farther south and then lose all the other things we need.”

Elephant Aid International officially purchased the property that is located on Laslie Road from Dean C. and Dale Piergiovanni on Dec. 14 for $2.4 million.

This will be the second time that Buckley has built an elephant sanctuary. The first was started in Tennessee in 1995 and now includes 2,700 acres of habitat.  She initially became involved with elephants in 1975 when she became the trainer for a young elephant named Tarra.

“I was 19 and enrolled in exotic animal training school in southern California,” Buckely said, “When I moved there, there was a brand new baby elephant that had been imported form Thailand and she was on exhibit in the back of a truck at a tire store.”

She eventually purchased Tarra and they spent the next 20 years traveling and performing.

They performed in circuses, on television and in movies. Tarra also became the world’s only roller skating elephant at the age of 8. Eventually, they stopped performing and began spending time at zoos. Buckley eventually decided to settle down and create a space where Tarra and other elephants could live in a more natural environment.

This led to the creation of the elephant sanctuary in Tennessee. Over a 20-year period, the sanctuary rescued 23 elephants. Buckley is no longer affiliated with the sanctuary and has spent that last few years working with elephant caretakers in Asia on humane treatment including foot care and alternative containment options other than chains.

Her plan is to use her knowledge from 40 years of working with elephants and from building the initial sanctuary to create a place where captive elephants can thrive.

She learned during the initial project that if the herd went over seven elephants the family structure fractured because in the wild, Asian elephants live in smaller family groups. Because of this, the number of elephants at the new sanctuary will be limited to seven. There will also be no males or breeding program. It will solely be a rescue facility for female Asian elephants that have lived in captivity.

The plan is to set up cameras in the habitat where people that are interested can go online and see elephants live in a replica of their natural environment.

Tarra will be the first elephant brought to the sanctuary, hopefully in the next six months, and more will be added as rescue opportunities arise.