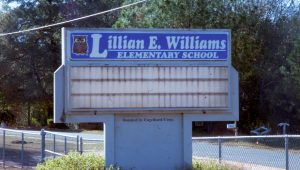 The sale of Lillian E. Williams Elementary School was finalized on Nov. 29 for a price of $30,000. Attapulgus resident Art King purchased the building and the lot it is on.

King said that he started school there and did not like seeing it just sit there. After he discovered that the previous bid on the lot had fallen through, he proposed an offer that the Decatur County Board of Education did not refuse.

In the summer of 2015 the board received two bids for the property. One bid was for $3,000 from the motorcycle group the Honor Sentinels who wanted to building for their clubhouse. The other was for $100,000 from Julius Byrd.

Byrd, an Attapulgus native living in Baltimore, Maryland, at the time, was unable to come up with the funding for his bid. After sitting idle for months following the lost bid from Byrd, Art King finally decided to purchase the property. King attended LEW, and said he didn’t like it just sitting there.  However even with it being purchased by King, the school will continue to just sit there.

King has said he has no immediate plans for the building despite buying it. He does have an idea for the future that would include outdoor courts for the children or Attapulgus to play on but that is all pending talks with investors, per King.

“I would like to make it a community center,” said King, “there is just nothing for the kids to do (in Attapulgus).”

Decatur County Board of Education Superintendent Tim Cochran added that although the last bidder fell through, that failure actually made it easier for the board to accept King’s proposal. According to Cochran, the property had been deemed surplus after the $100,000 bid fell through, which allowed for King to submit his proposal to the board. The proposal was then voted on and passed by the members of the board, which finalized the deal.

Sale of the school was the only real option for the board, according to Cochran. The cost to demolish the building was projected to be more than the cost to keep the building and find a buyer for it.

While the immediate future seems stagnant for Lillian E. Williams Elementary, hopefully King can turn the property into another positive for the area.