Isaac’s Bakery sold to the Brocks 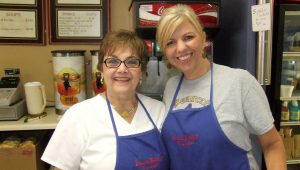 A family dynasty of 88 years of business ownership by one family, has come to an end with the sale of Isaac’s Bakery to Tina and Shannon Brock. Probably the oldest still operating business in Bainbridge, it was begun in 1928 by H.E. Isaac Sr., then sold to H.E. “Poodle” Jr. and his wife Hilda in the 1950’s, before being passed down to Al and Marilyn Isaac Collins in 1986.

The sale to the Brocks was concluded on Veteran’s Day, November 11.  Marilyn said it was very fitting because her father, a World War II veteran, was named “Mr. VFW of Georgia.” He had served as the state commander and also held national offices.

“It was extremely emotional for me,” said Marilyn, who grew up in the bakery.

She and her husband Al actually owned it longer than the rest of the family, allowing, “It has been good to us.”

They will continue working with the Brocks to help them learn the ins and outs of the business.

Tina said she has no plans to make any changes in the menu or services provided.

“It’s been a very successful business for 88 years, so why would we want to change what is working?” She was also happy to keep the same good help in Brandy Hatcher and Tara Sanders.

Tina has worked in retail all her life. She owned and operated the Tanning Company for six-1/2 years before selling it. She said they were interested in buying the bakery because they wanted to continue owning a local business.

It continues to be a family venture. Her husband Shannon will continue his job with York & Assoc., but has taken over Mr. Al’s place of coming in early and getting things started. Even their two children, Darley, 16 and Dylan, 13, get in on the action by wiping down tables and cleaning up.