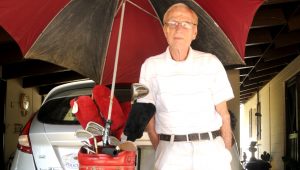 Former Bainbridge Country Club golf pro George Herring stands with equipment given to him for being on Arnold Palmer’s pro staff.

The golf world shed a tear Sunday when legendary golfer Arnold Palmer passed away in Pittsburgh at 87.

A Bainbridge man who was friends with him was stricken by the news as well.

George Herring, 85, saw the news on his television Sunday evening, and he remembered back to when he met the accomplished golfer for the first time.

It was 1963. Herring was the pro at Bainbridge Country Club, a position he held for more than 20 years, and a PGA Class A Pro. A new clubhouse, remodeling the old course and adding another nine holes to make it an 18-hole course are among his accomplishments while there, but he talks about his first meeting with Palmer with the most excitement.

Palmer, who happened to also be an accomplished pilot, was flying and experienced turbulence. He needed to land his plane.

Fortunately for him, he was right over Decatur County. He started his descent to the Decatur County Airport below. Leonard Conger, an attorney in Bainbridge, called Herring to tell him who just landed.

“So I went out here and met him and talked to him, and he asked me how golf was going,” Herring said. “He asked what clubs I used.”

Club pros are usually signed with a company supplier like Titleist or Callaway. Herring asked why Palmer wanted to know.

“He said, ‘How about being on my staff, George.’ That’s how it started. I signed with him,” Herring recalled.

“It was great,” he said. “I was tickled to death. Brand new equipment and balls to play with. It was fantastic.”

Palmer won 62 PGA tournaments during his career, seven of them at majors. He is widely regarded as

“The King” of golf, and had an entire fan base dubbed “Arnie’s Army” that remains loyal to this day.

“He was the most personable, and the greatest,” Herring said. “Everybody loved him. He’ll be known as the legend of the modern golf world.”

The start to Bainbridge’s season has been a slow one. The Bearcats (1-3) struggled to get the offense going Friday... read more