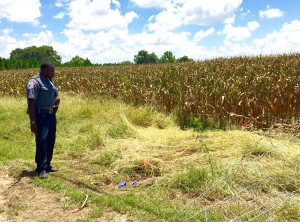 A police officer doesn’t have to be in a uniform to do their job.

Bainbridge Public Safety officer Leroy Akins was traveling to church Sunday afternoon on Hwy. 27 North when he spotted a cloud of dust on the shoulder of the southbound lane around 2:20 p.m.

The driver of a church van leaving Colquitt had fallen asleep, swerved off the road and flipped the vehicle, according to a Georgia State Patrol incident report.

Akins turned around and saw a woman who had stopped to investigate the accident waving for help.

“The first thing I noticed was the van with broken out glass and nine passengers inside,” Akins said. “There was a lot of bleeding.”

So Akins did what he was trained to do. He immediately opened up the van and began pulling the injured passengers out one by one, getting them away from the wrecked vehicle in case it was to catch fire or cause more harm to the passengers.

By the time they were out of the vehicle, EMS was on the scene. One of the passengers was life-flighted to Tallahassee Memorial Hospital. The other eight passengers suffered non-fatal injuries, GSP reported.

“I was just helping folks, protecting and serving,” Akins said. “You need to be always ready, always prepared, whether you’re on duty or off duty.”

Akins urged drivers not to get behind a wheel if they were tired.

“The best thing to do is just not drive,” Akins said. “If you’re tired, let someone else drive, or don’t drive at all. Also, wear your seatbelt. From the way it looked, (some of the passengers) probably weren’t.”

New car club plans events to give back to the community