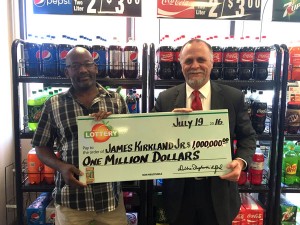 Bainbridge has a new millionaire among its residents. No one new moved to town; James Kirkland, 55, just hit the jackpot by winning $1,000,000 off of a “Grand Casino” lottery ticket.

On July 5 after getting off of work around midnight, Kirkland purchased three lottery tickets from a vending machine inside of the Circle K on Dothan Road. He scratched them off while sitting in his car. The first two weren’t winners, and Kirkland wasn’t expecting the third to make him a millionaire.

“I just sat there and looked at it,” said Kirkland. “And then I pinched myself to make sure I wasn’t dreaming.”

After the cashier confirmed for Kirkland that he had won the top prize, Kirkland said, “I started dancing, and I’ve been dancing ever since.”

First, Kirkland plans on using the money to pay off his house and then fulfilling his dreams of owning a new truck: a Chevrolet Colorado. Kirkland says he “might even go to Disney World.”

According to the Georgia Lottery, all profits from the lottery go towards paying for educational programs such as the HOPE scholarship program and Georgia’s statewide, voluntary Pre-K program. Over 1.7 million students have received HOPE, and over 1.4 million children have attended Pre-K.

Contemplating the many ways to get around in the…