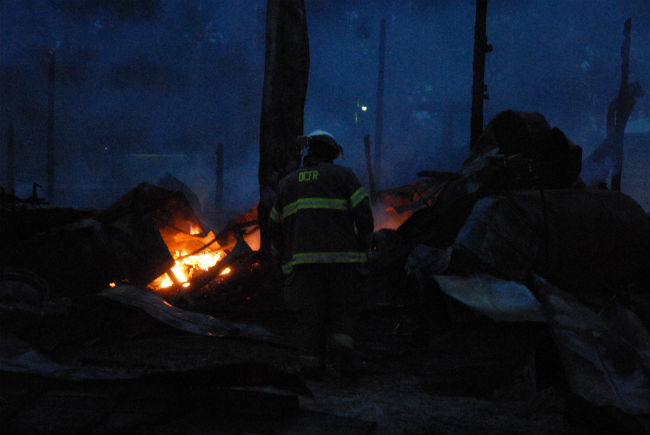 Decatur County Fire and Rescue responded to a structure fire on Pine Hill Road at 7:13 p.m. Saturday evening. The fire engulfed a storage shed at the farm of Keith Griffin. According to Griffin, neighbors that live across the street from the farm heard two explosions as the fire got started.

The structure was used to store farm equipment and items destroyed in the fire include multiple tractors, a bulldozer, an old pick-up truck, irrigation motors and tires and more.

Multiple firefighters were working to put out the flames and move debris to reveal more flames that were hidden. They were using tanker trucks in a rotation to make sure they had enough water to control the fire.  According to McCann, in the first hour they used between 10,000 and 12,000 gallons of water on the structure and they were still shuttling more water to the scene.

“I would say they was probably fifty to seventy-five feet in the air, but we had a column of smoke you could see several miles from here,” McCann said of the flames.

The fire is believed to have started in the middle of the structure and to have spread from there with the help of the wind. According to McCann, when Griffin first arrived on the scene the tractor at the front of the shed was not yet on fire and he was hoping to move it, but was unable to.  The cause of the fire has not been determined at this time.

McCann said the initial fear was that the fire would spread to the adjacent shed where the chemicals are stored, but that they were able to contain it to the structure where it originally started.

For more pictures from the scene please check The Post-Searchlight’s Facebook page.