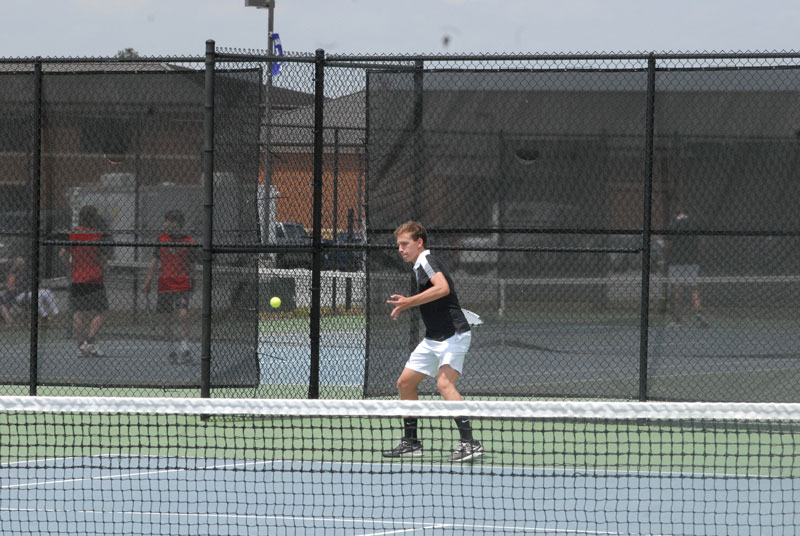 Jones Gossett picked up the Bearcats’ only win of the day

The Bainbridge High School boys’ tennis team’s season came to and end Tuesday afternoon with a 3-1 loss to Woodward Academy in the second round of the state playoffs.

“I thought they put up a good fight against a very good team from a private school in south Atlanta so I don’t think that we have anything to hang our heads about,” coach Amy Thomas said. “I thought we were actually pretty even. I think on another day it could have gone our way on a couple courts.”

The War Eagles took an early advantage in the contest when they won number three singles in straight sets including a 6-2 victory in the first set. The War Eagles quickly took a 2-0 lead in the best-of-five contest with a win in number two doubles.

The Bearcats were still alive though and held the lead in three remaining matches. Jones Gossett found himself in a competitive match in number two singles as he traded games with his opponent early on.

As the match continued he found a groove and pulled away to the win the first set before cruising in the second set to win the match.

“I think that’s what I’ve seen from Jones all year,” Thomas said. “I’ve seen him start out steady then find a rhythm and then just steadily overcome and dominate his opponents. I don’t think anybody that he’s played at number two singles has given him much of a fight all year.”

In number one single senior Nour Hasona battled back-and-forth with his opponent throughout the first set before finding himself up 5-4 and serving for the first set and a chance to put his team in position to advance. The Woodward player broke Hasona’s serve and won three straight games to claim the first set. He then raced out to a 4-1 lead in the second set and cruised to a victory to clinch the match for Woodward.

“Specially knowing Nour’s a senior just to see him get frustrated is hard,” Thomas said. “That’s not indicative of the kind of player he is. He’s a great player.”

In number one doubles Bryce Howell and Mark Loeffler won the first set, but dropped the second. They were pulled during the third set because Woodward had clinched the match with the win in number one singles.

The state championship team was made up of back left to right: Maggie Palmer, Maloree Inlow, Emma Foster, Lauren Godwin... read more