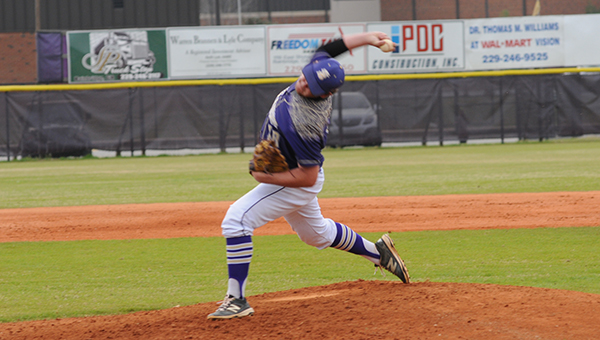 Ty Varnum gets ready to fire a strike during the Bearcats’ 2-1 win over Worth County on Wednesday. Varnum pitched a complete game allowing one run on four hits while striking out nine. — Powell Cobb

Keith Lyle slammed a homerun against Worth County to lift Bainbridge to a 2-1 win Wednesday at the BHS fields.

Bases were empty and Bainbridge was up 1-0 when Lyle swung on a full count. He made solid contact and sent the ball soaring over the fence in left field.

“Our shortstop Keith Lyle really came up big for us at the plate,” coach Brian McCorkle said.

Ty Varnum held strong all seven innings on the mound, striking out nine Rams, allowing four hits and one run.

“Varnum did a great job on the mound, and he really kept us in the game,” McCorkle said. “We did a nice job of making plays behind him.”

Worth County scored one run in the seventh on an RBI single by Tripp Goff. Worth County wasn’t able to bring any more runs in.

Bainbridge went up for good in the third inning with Lyle’s homerun.

The lone run of the game for Worth County crossed the plate in the seventh inning on an RBI single by Goff.

Bainbridge is back in action Monday, March 21, against Albany. First pitch is at 5:30 p.m.