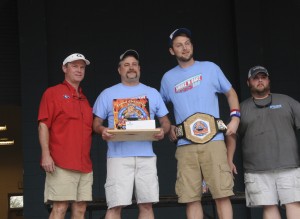 By Powell Cobb and Carolyn Iamon

Shake ‘N Bake BBQ team members Tim Scheer and Joe Musinger held their 2016 Flames on the Flint BBQ Cook Off Grand Champion trophy and belt in front of 94 other teams at the awards ceremony finale Saturday.

Hailing from just west of St. Louis, Missouri, Scheer and Musinger woke up at 3 a.m. last Friday and drove 12 hours straight to Bainbridge to compete in the third annual cook off.

“We were the last ones to show up, and that’s fine. We cook hot and fast,” Scheer said, happy and smiling with the Grand Champion belt in his hand.

Shake ‘N Bake BBQ turned in perfect-scoring ribs to the judges Saturday, hoisting them high enough in the rankings to snag the No. 1 spot and leave with the $10,000 prize.

“A crowd like this is unbelievable,” Musinger said. “You see a contest with this many entries and this much prize money, (it gets your attention). The whole thing is, there are a lot of good teams here. It kind of lets you know where you are.”

A total of $50,000 was handed out to barbecue competitors, $7,000 of which went to the reserve grand champion team of Yes, Dear BBQ.

It was the biggest purse to date, and the same amount of money will be handed out at next year’s Flames on the Flint.

Cook Off Chairman Ronnie Godwin said the turnout this year was awesome. More teams than ever flocked to the Earle May Boat Basin to heat up their grills, traditional smokers, or in Shake ‘N Bake’s case, drum smokers.

“I thought it went really great,” Godwin said. “The turnout was awesome and it was a pretty impressive field of national class teams. We had a lot of the ‘who’s who’ in the sport.”

Godwin gave kudos to employees of the City of Bainbridge and River Town Days Chairman David White for making the entire weekend come together so nicely.

Adrienne Harrison, President of The Bainbridge –Decatur County Chamber of Commerce, was very excited about the success of River Town Days.

“It was the greatest festival I’ve ever been involved with,” she said. “It was great. I’m so happy with the attendance, with all the competitors, the music and even the weather cooperated.”

She praised the hard work of the River Town Days committee and White, assisted by Godwin and Ryan Giddens and all their workers.

“We had some really big names in barbecue this year,” she said.

Asked how they managed to attract the big names, she said, “We really put on a top-notch event in a beautiful setting and we treat all the competitors really well.”

The Backyard Barbecue Competition had six smaller teams competing, all being judged by the same judges who taste and rate the professional team’s barbecue. Under Construction BBQ was awarded Grand Champion.

“Flames on the Flint is the best experience in barbecue in the South,” Michael Mixon, son of famed barbecue cook Myron Mixen, said outside his Old Jack’s South team trailer last Saturday. “It’s the atmosphere, the people. The fellowship that’s what it’s all about here. It’s all about having a good time cooking.”

If you’re coming down Shotwell Street toward the Earle May Boat Basin this... read more