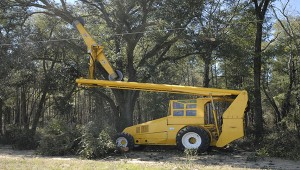 In an effort to combat the problems of overhanging trees damaging cars on dirt roads throughout the county, Decatur County commissions reached out to Rob Cohen of RR&E Pecan Farms. Cohen held a demonstration today on the ability of his hedger to clear overhanging branches.

The hedger is traditionally used in citrus groves and has gained popularity recently among pecan farmers. The machine, which is made in Israel, cuts branches using two spinning blades on a large boom and can reach more than 50 feet in the air. Cohen and other pecan farmers use hedgers to allow more light and airflow in the pecan farms and combat overcrowding in the groves.

Before the demonstration there were some questions on whether the hedger would be able to cut through the oak branches. Those questions were quickly dispelled though as it effortlessly did the work.

“Pretty impressive,” said County Administrator Alan Thomas. “We are trying to get some of the roads that are overgrown and tearing up vehicles and do some limb clearing. We are trying to find the best solution.”

The hedger is one of the options the county is looking at to solve the problems caused by overhanging trees. Another possible solution is to use a giraffe tree trimmer. It resembles the hedger, but instead of two blades on a spinning boom, there is only blade at the end of a long arm. Giraffes are commonly used by utility companies to clear areas around power lines.

If the decision is made to use a hedger, Thomas said the plan would be to contract with RR&E Pecan Farms to do the trimming and then use prison labor to clean up the branches behind the hedger.

Commissioner Pete Stephens said that his main questions are how much will it cost, who has liability and how housewives will react to trees being cut down.