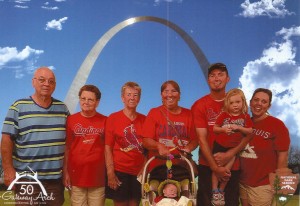 Grandmother Janice May and great Grandmother Lannette Lambert Kelly, Mother and daughter both of Climax recently traveled 863.8 miles, 13 hours 21 minutes one way, going through 6 states Georgia, Alabama, Tennessee, Kentucky, Illinois and Missouri to visit their granddaughters in Fulton Missouri. Joining the duo were, Great Aunt Sylvia Cox, Lannette’s sister, formerly of Climax, and her husband Charles Cox both of Albany.

Janice said, this being a road trip Charles quickly became the chauffer, and Sylvia was the navigator. The group decided to drive mostly two lane road to do as much sight-seeing as possible.

Now most grandmothers think their granddaughters are special, but Janice and Lannette are an exception to that rule. They say that little Jordan Grace Josey age 3 and her new little sister Jamison June age 2 months are true miracles.

Both girls were conceived through In Vitro Fertilization (IVF) which is a complex series of procedures used to treat fertility and assist with conception of a child. Both girls are special to their parents as well, who are John and Stacey Roth Josey of Fulton, Mo. John formerly of Climax, is the son of Janice May and Wayne Josey, both Climax natives. He is the grandson of Charles Edward and Lannette Kelly and Rebecca and the late J.C. Josey all of Climax.

The group left on the nine day trip August 28th making a stop- over for the first night in Geraldine, Alabama to visit Lannette’s son and Janice’s brother Tracey and his wife Delena Kelly. The host decided to take everyone out to dinner that night to a popular Mexican restaurant.

Around Climax Lannette is known for her Southern culinary talents, and if you ever sample one of her homemade cakes you would agree it is mouthwatering lip smacking good! So naturally she was looking forward to the night out and something different.

This was the first time eating Mexican food for Lannette, and unfortunately she said it did not meet her expectations or compare in any way to what she was accustomed to in Southern dishes. She commented that she is not a fan of the Spanish cuisine.

Although they were not glad to leave Tracey, the next day found everyone anxious to get on the road for the many miles they yet had to travel; however, they did find time to do some sight-seeing in Wickliffe, Kentucky home of Fort Jefferson Memorial Cross. A 95 ft. lighted cross that stands on the bluff of the Ohio and the Mississippi Rivers. The cross can be seen from 3 states, Missouri, Illinois and Kentucky.

The cross light is used for many purposes, among several Janice said were: Weddings, Memorial services, Candle light services on Sept 11, and annual Easter Sunrise services. It is a popular light for people passing through on hwy. 51 also.

After many miles and much anticipation, the travelers arrive at their destination of Fulton, Mo., the home of the Josey’s at 8:30 PM. Their oldest granddaughter Little Miss Jordan Grace was allowed to stay up past her bedtime due to the excitement of getting to greet her grandmothers and great Aunt and Uncle, this she did with several warm hugs and smiles. However, Janice said this was extra sweet, another reason for this trip was to meet for the first time the newest little member of the family 2 month old Jamison June, Jordan’s little sister.

With a few more neck hugs everyone soon settled down for a night’s rest to prepare for the busy itinerary John and Stacey had planned for the family’s visit.

“Sunday morning coming down,” at the home of John and Stacey Josey with a delicious aroma filling the air as they prepared breakfast for John’s Mother, grandmother, and guest. Sunday was a day of rest; however, Jordan did convenience all to go with her to play at the park. The park was located by Little Dixie Lake, and Lannette said Jordan seemed to be delighted that her Great Granny and Great Aunt Sylvia could swing with her, and she showed of her bike riding skills too.

Day four was an expedition to Clark, Missouri to experience the life of an Amish Community. The Community beginning in 1953 had a population of approximately 200 members. Janice said, the families in this town live off the land, and have no indoor plumbing or electricity.

They make and grow all that they have. They divide their work week into labor, worship, and education. Everyone was amazed at how young the children begin to work in the community and the fact that no one wore shoes. They only got one pair of shoes a year and saved them for the winter. (Sound familiar anyone?)

Day five was a day for Charles to enjoy as they toured the Auto World Museum in Fulton. The museum is more than 20,000 sq. and is a building housing vintage cars.  Janice said they were transported through yester-year while strolling the lanes of cars and trucks; Lannette and Sylvia were surprised to find a unique car that had the same name as their maiden names, the 1909 Lambert Touring car. They said they never knew this. They also found an old player piano and inserted some coins to experience the up-beat tunes as they took a trip down memory lane.

The next day was one of rest and packing for the grand-adventure of the trip…the trip to the big city of Saint Louis.

Day seven the group traveled caravan style to the big city the first stop was the zoo. Janice said, both girls enjoyed this as the both love animal, the zoo is 90 acres with 5,000 animals. A baby Orangutan caught the attention of Jordan and the game began monkey see, monkey do as she played with him through the plexi-glass.

After the zoo the group checked into a hotel and rested before the exciting tour to the top of the Gateway Arch. While waiting Janice and Sylvia visited the old historic Court House of Missouri, it was built in 1875; the place where the legal battle of Deed and Harriet Scott took place. They said the building was beautiful.

At 6 PM everyone met at the hotel to tour the Gateway Arch. The Arch is 630 ft. (192m) monument in St. Louis. It is the world’s tallest arch and the tallest monument in the Western Hemisphere. It was built as a monument to the Western expansion of the United States. It sits on the banks of the Mississippi and was completed Oct. 28, 1965 It took 2 years to build and open to the  public in 1967, The arch is earthquake resistant and designed to sway up to 9 inches in either direction.

Even though the arch has been around for many years these Southern travelers were very uneasy about going so high up. They entered in little cars about the size of a double Ferris wheel seat. Only five people could fit into one.

The ride up was 4 minutes up but 3 minutes to come down. As they entered the top Charles knew he couldn’t hang out up there, he was too uneasy, and as soon as he hit the top Lannette said he saw what he needed to see and soon exited back to the bottom to wait for his group. He said he only wanted to be as high off the ground as the tail gate of a Chevrolet pickup!

Everyone else enjoyed the view and the experience of making it to the top of the arch where one could see the entire city Janice said.

Day eight all said they goodbyes and more hugs for two miracle little girls, and the fun they had seeing everyone. The travelers headed South stopping again for the night at Tracey’s, and leaving Alabama on day 9 making their way back home to Climax. They said “Happy to be home and were missed by all the other members of the family!”

Lannette said the highlight of the trip for her was seeing John and his family and making such great memories.

Sylvia said her highlight was going up in the arch while Charles said his was visiting the car museum.

Janice said her highlight was seeing her son John and daughter-in-law Stacey and playing with her special granddaughters; also making the memorable trip with her Mom Lannette and her Aunt Sylvia and Uncle Charles.

John, Stacey, and their miracle little girls all plan to be in Climax during Thanksgiving as well as visiting Swine Time.