Rotary gets lesson on Chik-Fil-A business 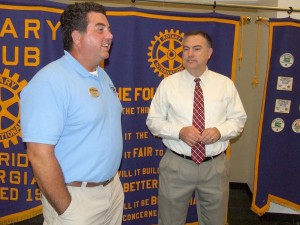 Rotarians this week heard some marketing and success stories of Chik-Fil-A, as well as the history of Rock Ranch, near Barnesville, Ga., and how it promotes Agri-Tourism.

Manley met Cathy when he was 12 years old and worked for him as he went through school.

He credits chickens as helping to keep him in the cattle business during lean years.

He began his talk by dispelling any rumors that Chik-Fil-A would be opening a restaurant in Bainbridge anytime soon, saying the marketing studies and numbers don’t support it.

He then  went on to describe how an individual can purchase a Chik-Fil-A franchise for the mere sum of $5,000, but it must be “unborrowed” money. However, there are 3000 applicants for every restaurant that opens.  The premise of the company is that they are looking for persons to whom they can give an opportunity—one who could not do it on their own. The corporation then does all the development, building and training of the franchisee and employees. Once open, operators must pay a percentage of their earnings back to corporate.

It is known to be a very lucrative business, with 1870 restaurants in 36 states and growing at 5 percent a year. It is also known for being conservative and based on the Christian principles professed by the founder Cathy, who was Southern Baptist.

Manley said the big secret to their successful service training of employees is based on Mathew, Chapter 5 in the Bible—basically, going the second, or extra mile.

Manley lives on Rock Ranch and oversees the beef cattle business. He is also the founding president of the Georgia Agri-Tourism Council, was appointed by Governor Deal to the Georgia Tourism Foundation, and holds offices in many beef cattle organizations.

He indicated visiting the farm appeals to city people, especially children, who like to  see the animals up close. He began opening the farm to agri-tourism because income from acreage is limited to the amount of crops or livestock that can be grown there. In order to sustain a family farm today, the business must be expanded.

He pointed out two good examples of this in Decatur County: Dan Provence and his tree farm and the Rentz family with its homegrown produce business.

Rock Ranch has purchased nearby farms as they have become available, modernized the houses, and now rent them out to families who come for the night at the rate of $300.

They also hold corporate picnics on the premises. Two nearby corporations, Aflac and Geico, have had as many as 400 people on the grounds at a time.

The farm continues to grow its own produce, has branched into U-pick fruit and veggies and believes in promoting whole local food that is natural and wholesome.

Back to Chik-Fil-A – the company believes in hiring youth and allowing them to work while teaching them the principals of work. The company rewards its youthful employees by granting scholarships for them to attend college.

They also run summer day camps in connection with local churches. This was done in 80 cities last year.

Manley reported Chik-Fil-A surpassed KFC in sales last year, and he sees more success down the road for both the restaurant and Rock Ranch.

Manley has a strong connection to Bainbridge, as he is married to the former Hayley Hall and is a brother-in-law of current Rotary President Threasa Hall.

I had not taken the hint. Many well-meaning people, perhaps even entrepreneurs of a kind, had stopped by my house and... read more