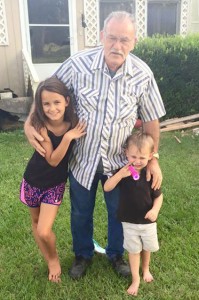 Melisa James Mcewen turned 16 years old while visiting her Grand paw Lloyd Seals of Climax during the summer of 1999. Recently on July 23 she made the trip from Mississippi to visit her grand Paw again on the way to her family’s vacation in Florida.

This time Melisa brought her children Kayla age 9, Kash age 3, and her husband Stewart Mcewen, as well as a nephew Riley Roberson age 15 to spend some quality time with her Georgia family.

The Mcewen picked up their nephew Riley from a college in Florida where he had been in a summer camp for exceptionally gifted students who scored very high on the ACT test.

Melisa recalled and shared many memories of that summer in 1999. She said her Paw, as she lovingly calls him, and Mamaw Myra taught her many things that summer including how to sew throw pillows and several life lessons.

She said Mamaw Myra made her some delicious Southern dishes such as egg omelets southern style with mushrooms for breakfast, and the most delicious green salad she had ever eaten. 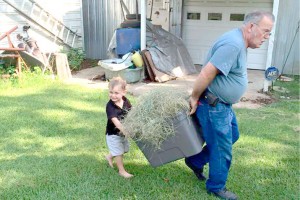 Kash McEwen helps his grandpaw take hay to the horses

She also said Myra took her shopping to Goody’s. Myra said, “We just had fun cooking and doing simple country things.” Melisa remembered being afraid of the cemetery near Lloyd and Myra’s home, and said when they would all go to bed at night she would slip back into the living and sleep on the sofa so she could be closer to them! Myra said they always wondered why they found her asleep on the sofa.

Then that summer became extra special as Paw and Mamaw Myra gave Melisa a Sweet 16 birthday party. Enlisting the help of Myra’s family they held a cake and ice cream party for Melisa as they recognized this special time in her life.

Lloyd and Myra had seen Melisa’s children on several visits they made to Mississippi, but the children had never been to Georgia.

On their visit Kash helped his Grand Paw gather and take hay to the horse.

While Kayla enjoyed going to Bainbridge and seeing the old train and the animals, and playing with Lady Dog, she loved time spent with her Grand paw too.

Lloyd said it was so hard for him and Myra and the children to say good-bye as they departed home to Mississippi with tears flowing.

Coach Chris Bryant says practice is going well and he is looking forward to getting his Bainbridge High School Lady... read more