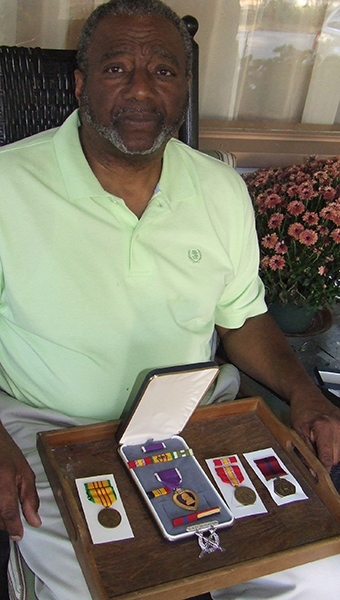 Leon Hitchcock displays his most prized medals, including a Purple Heart he earned from serving in the Vietnam War. — Carolyn Iamon

As a Vietnam War veteran, Leon Hitchcock takes part in Veterans Day services, but said it is very hard for him to do, as it brings back too many bad memories. His mind is filled with faces of the guys who can’t be there.

“There isn’t a day goes by that I don’t think about the experiences at Nam. It was terrible,” he said, shaking his head.

He volunteered for the U.S. Marine Corps at 18. When he first landed in Vietnam he said he was shocked as he saw all the bombs dropping and artillery firing all around him. “I thought to myself, I have to put myself in a survival mode, or I’ll never make it home.”

He was in Vietnam from June of 1967 to July 1968, where he fought in such major battles as the Tet offensive of 1968, Hue City, and Quang Trj Province. “I was even in Cambodia when the government said there weren’t any U.S. troops there,” he adds. During one of the battles he received multiple shrapnel wounds from an exploding grenade. He was awarded the Purple Heart and still has some complications from those wounds.

He related one incident of being in a small native boat with what he called moms and pops, the natives who would take the Marines across the rivers. The boats were so full of holes that they always filled with water without constant baling. As they rounded a bend in the river the enemy opened fire on them. “Everyone in the boat was killed but me,” he said. “I never thought of being shot, but of drowning with all that armor on.” He began shedding it so he could swim to shore and noticed people living along the river just carried on with their life chores as if nothing was going on.

The Marines inaccurately sent information to his home and notified his mother he had been killed in action. She had some hard days until she received a letter from Leon written in the hospital and realized he was still alive. When he came home he settled in Macon with his mother and worked at Warner Robins in a veteran release program, then at a postal service.

He obtained his B.A. degree in History and Political Science from Ft. Valley State University and met his wife Linda C. Hitchcock, formerly of Bainbridge, who was a student at Albany State.

He worked for Union Carbide nuclear division in Oak Ridge, Tenn. for nine years and ultimately moved to Bainbridge with his wife and family. He is retired as a corrections officer at the Decatur County jail.

He did meritorious service in Vietnam and continues to serve his country and his community as a volunteer mentor in the One on One Mentoring program that works with middle school students.

According to Alesia Brinson, director of the program, he was one of the first to step up and volunteer when the program began in 2005.

“I call it my therapy. It gives me joy,” he says of the mentoring experience. “I see the kids on the streets, many of them from broken homes, and I know they need some guidance.” He visits with each one two or three times a month and tries to keep in touch when they move on to high school and beyond, even when he is assigned a new one

He is interested in knowing more about their home situations, but mostly he concentrates on helping them improve their grades, by tutoring, or whatever it takes.

Hitchcock is a member of Friendship Missionary Baptist Church, and American Legion Post 502, where he is a service officer.