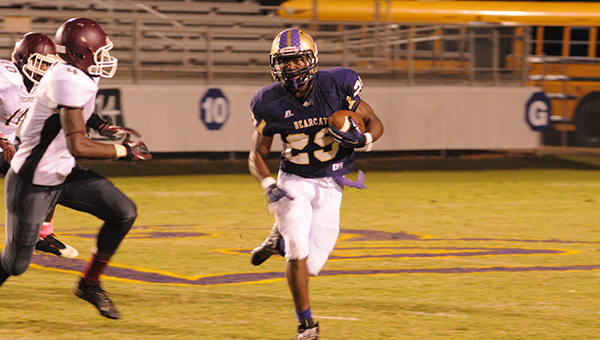 Friday’s game against the Dougherty Trojans was the first time Bainbridge coach Jeff Littleton saw his team play a full four quarters of football.
The effort paid off for the Bearcats (5-3) as they soared to a 45-16 homecoming win at Centennial Field.
“We played more of a four quarter game for the first time,” Littleton said. “The kids played hard.”
Junior quarterback Elijah Tyler led the offense with 107 yards rushing on six carries and a touchdown on the game’s opening drive. He was 1-for-3 passing for 19 yards and an interception.
His score came at the 10:51 mark in the first quarter. The Bearcats ran four plays for 70 yards on the ground, culminating in Tyler’s 22-yard touchdown run.
Bainbridge held the Trojans (3-4) to only two scoring drives. Both touchdown efforts were topped off with successful 2-point conversions.
“We just executed our game plan,” senior defensive end Hudson Reynolds said. “They put up 16 but our offense got it done. We really didn’t have to worry too much about the point margin. But we got out there and fought well.”
After a Trojan turnover on downs, the Bearcats marched down the field for kicker Evan Oldaker to nail a 26-yard field goal, putting the score a 10-0 with 1:53 left to go in the first.
Freshman running back Dameon Pierce rushed for 68 yards on nine carries. His first touchdown of the night came with 10:29 left in the second quarter. Pierce had ran the ball right up the goal line and pushed the ball into the end zone on third-and-1 to raise the score 17-0.
Dougherty charged back with a 15-play, 70-yard drive and put eight points on the board with 3:08 left in the first half.
The Bearcats next drive ended quickly with Tyler’s interception pass, but the Trojans were punting the ball three plays later.
The Bearcats were able to score on a 19-yard pass from Tyler to wide receiver Tyler Story with 5.3 seconds left in the half. Bainbridge entered the locker room leading 24-8.
Dougherty County scored a touchdown and 2-point conversion on second half’s opening drive, but Bainbridge’s answer came in the form of a three-play drive for Pierce’s second touchdown of the night. He ran 21 yards for the score and put Bainbridge ahead 31-16 with 5:08n left in the third quarter.
“Up front was clicking,” Pierce said. “I give all my credit to the line.”
The next three drives were short, both defenses holding strong. The Trojans recovered a Bearcat fumble, but were facing a fourth-and-16 four plays later. On the punt, senior defensive back Victor Bodison rushed the punter and got his hand on the ball. Senior line backer Dalin Mack caught the ball and hurried 15 yards into the end zone. The touchdown sent the Bearcats to a 38-16 lead with 51 seconds left in the third quarter.
On the first play of the Trojans next drive, sophomore Kerenski Williams intercepted a tipped pass. Echoing Mack’s last play, Williams took the ball to the end zone.
“I just saw one of the players deflect it and I saw it in the air, bobbling,” Williams said. “I picked it up and took it to the house. It was awesome.”
The fourth quarter remained scoreless, despite the Trojans’ best efforts to put more points on the board.
“It was a good all around effort,” Littleton said. “We’re getting better fundamentally, offensively, defensively and on special teams.”
The Bearcats next game is Oct. 31 at Westover.