Worth running game overtakes Bainbridge in second half 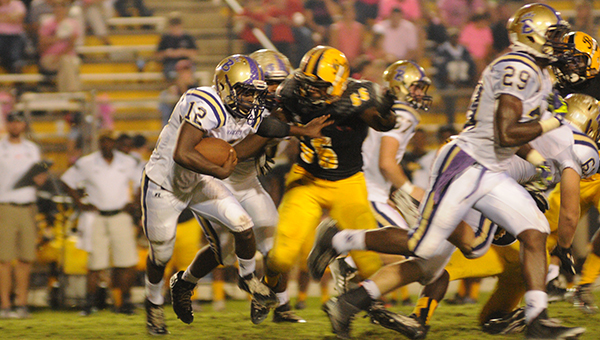 A stable of running backs kept the Worth County Rams fresh on offense as they charged downfield drive after drive for a 48-28 win over Bainbridge at Milt Miller Field in Sylvester Friday.
The Bearcats were tied with the Rams 14-14 at halftime, but weren’t able to stop their running game in the second half.
“The bottom line is they out blocked us and out tackled us,” Bainbridge coach Jeff Littleton said. “We’ve got to go back to working on fundamental blocking and tackling.”
Bearcat quarterback Elijah Tyler was 4-of-8 passing for eight yards. On the ground he rushed for 87 yards on 15 carries.
“It hurts a little bit,” Tyler said about the loss. “I got to work on hitting the holes better and outrunning people instead of taking on somebody.”
Behind Tyler was freshman running back Dameon Pierce, who rushed for 84 yards on 12 carries.
“I was staying focused and giving every ounce I had left,” Pierce said. “As a football player it hurts. But the kind of person I am, it’s a landmark for me to get better.”
Tyler was first to put points on the board when he ran 22 yards for a touchdown with 1:43 left in the first quarter. Kicker Evan Oldaker’s extra point was good and the Bearcats were up 7-0.
The Rams scored on their next two drives, both coming from junior running back Zytavious Anderson. Ahead 14-7, Worth County wasn’t able to stop Bainbridge from marching back down the field to even the score 14-14. Tyler scored on a 12-yard run with 48 seconds left in the half.
The Rams scored with Anderson with 10:42 left in the third quarter. Bainbridge marched right back to even the score at 21-21 with 9:25 left in the third. Worth County scored on its next two drives and raised the score 35-21.
With 10:04 left in the fourth quarter, Victor Bodison returned a kick off for 80-yards to raise the score 35-28. Bainbridge had hope.
But the Bearcats weren’t able to finish for the rest of the quarter. The Rams scored twice more and ran away with the lead. Bainbridge’s final play was an interception by Tyler intended for wide receiver Tyler Story.
The Bearcats are now 4-3 for the season.
“We’re fine,” Littleton said. “We just have to continue to get better each day, have a great attitude. If we continue to get better we can still fulfill our goals.”