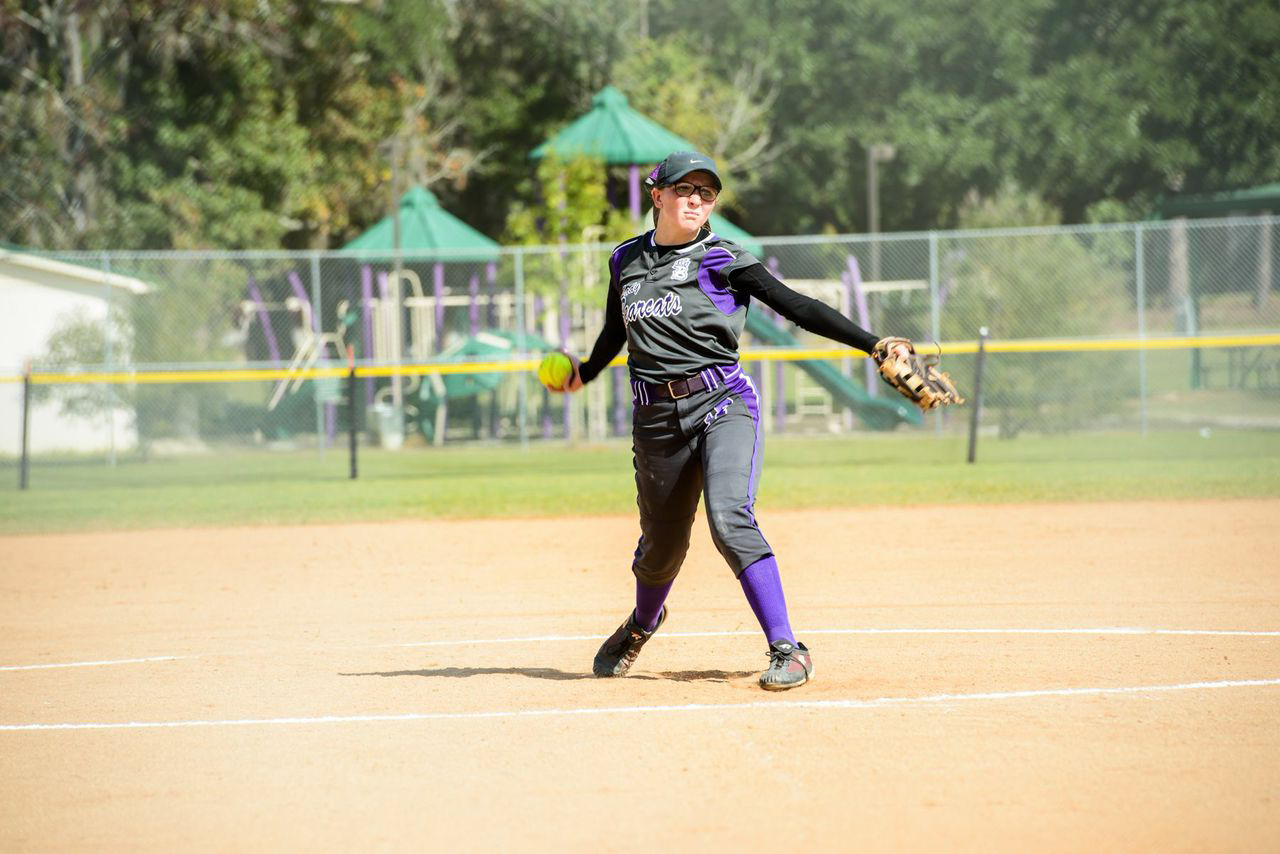 Pitcher Brooke Bates winds up and prepares to sling a pitch. — Jessica Cannon

Coach Amy Thomas’s Bainbridge High School Lady Cats softball team clinched a spot in the State Class AAAA Tournament next week in Perry after a 13-1 victory over the Monroe High School Lady Tornadoes and a 1-0 victory over the Worth County High School Lady Rams at the Region 1-AAAA Tournament Tuesday in Albany.
On Wednesday the Lady Cats lost 10-2 to the Thomas County Central High School Lady Yellow Jackets.
The Lady Cats  scored three runs in the bottom of the third and two more in the bottom of the fourth to pull away from the Lady Tornadoes.
First baseman Tori Sprenkle  and Maegan Harrison singled and came around to score in the third inning.
Winning pitcher Brooke Bates sparked a two-run, bottom-of-the-fourth rally against the Lady Tornadoes with a line drive double to center field driving in Thyra Smart who singled. Bates doubled twice and walked.
In their 1-0 state-tournament-clinching victory over Worth County, the Lady Cats scored their winning run in the bottom of the seventh. Tykira Adams, who singled, stole home with the winning run.
On Thursday the Lady Cats lost 6-1 to the eventual Region 1-AAAA champion Thomas County Lady Yellow Jackets. A fourth inning RBI single by first baseman Tori Sprenkle accounted for the Lady Cats’ only run.
Also on Thursday, the Lady dropped a 1-0 decision to the Cook County High School Lady Hornets. Despite a 14-strike out performance by right-hander Brooke Bates.
Lady Cats center fielder Taylor Swanner said she and her teammates were really fired up for the Region 1-AAAA Tournament. “Everyone was really focused and went out and pitched, hit and fielded well,” Swanner said.
Bates said all of  her pitches were working well.
“I think by changing  speeds I kept the balance,” said Bates.
Coach Thomas said she could not be any prouder of all her players for their great effort.
The Lady Cats, who finished third in the tournament,  will open state tournament play next Wednesday when they take on Perry  High School, the second place team from Region 2-AAA in a best two-of-three series in Perry. If they split their two Wednesday game, they will play again Thursday.