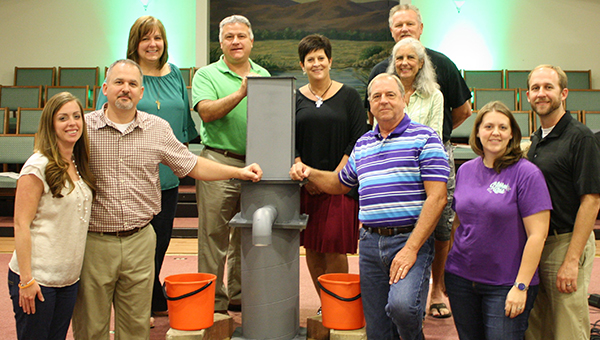 The Fellowship Baptist Church Missions Committee members gather around a replica of an African well built by Roxanne Worsley.

In the short span of one month, Fellowship Baptist Church members have reached, and even exceeded their goal, by raising $42,000 to build a well and provide shelter for approximately 200 orphans in the Mbale region of Uganda.
Pastor Mark Worsley is quick to state that it is not about the money to the church, but the work of the church missions committee that is important.
He explains they began to look for a project and after making a call to Ted Moody, president and CEO of Pennies for Posha, they were referred to Warren Moore, whose daughter Kristen had recently served two years as a missionary in the Mbale region of Uganda. She worked with a local group that had built a church and school on some land they had claimed in squatter’s rights. They called it Ebeneezer Baptist Church and the pastor was Fred Mazume. When the government decided they wanted the land, they came and bull-dozed everything down, leaving 200 children with no place to go.
A group from the First Baptist Churches in Newnan and Blairsville raised $16,000 to purchase an acre of land to rebuild, but had no resources to do so.
The Fellowship Church committee members met with the Moores to determine the most urgent needs, then took it to the members of the church. The response was immediate and overwhelming. Originally they planned to raise $20,000, but soon realized they had doubled their money.
The most urgent need was for a clean water source. A company from Australia has been chosen to build the well, and they believe it will become a source of water for many little villages around the area.
Another priority was to get the children under shelter as quickly as possible. A tent company in Texas that specializes in tents made for the African climate was found and they called to place an order for one 2400 square foot tent to serve as school and shelter. As they explained what they were doing and with whom they were affiliated, it was discovered the tent company president knew the group, had actually been to Africa on other projects, and cut the cost of the tent to the point they could afford to buy two tents – one for boys and one for girls.
The company has also agreed to accompany the Fellowship group when they go to Uganda in mid-December or early January to put up the tents. Worsley is hoping they can afford to place them on concrete floors so the children don’t have to sleep on the ground. He also wants to have enough money to purchase a bed for each child.
Worsley said he plans to go with the group when they go to Uganda and he was told he must bring “the Queen” with him. That is a native reference to his wife, Roxanne.
Worsley, who has been the pastor at Fellowship for two years, estimates the active church membership at 400 people.
He said they have also been helping with a year-long project to supply cut, milled lumber to be shipped to Ethiopia to build a school and chicken coops. This is a project of Dr. Jerry Spencer, a former pastor of Fellowship who is now in Dothan.
That effort concludes this week and he admits he has some concern that all the shipments will arrive at their locations without too much difficulty, but he is assured by those in charge that they have plenty of experience in dealing with the governments in these countries and they know what to do and how to do it.

Bearcats score 41 points in second half to take…