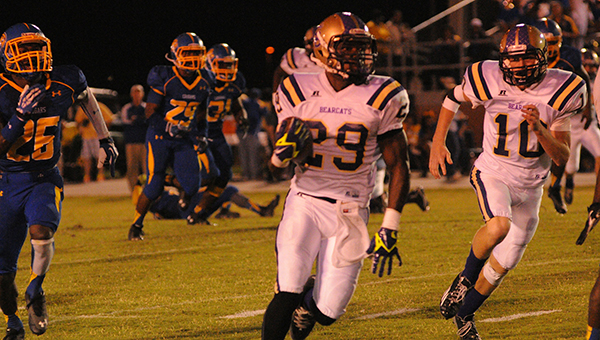 Freshman running back Dameon Pierce bolts down the field for a 56-yard touchdown during the Bearcats 31-6 win over Crisp County Friday. — Jeff Findley

Junior quarterback Elijah Tyler rushed for 127 yards on 21 carries during the Bainbridge Bearcats’ win over the Crisp County Cougars Friday.

Tyler said the line was blocking well and helped the Bearcats run a strong offense for their 31-6 victory. Bainbridge improved its record to 3-2 for the season and is 1-0 in division play.

“I felt better than I did last week, finding my holes and everybody blocking right,” Tyler said. “I felt pretty good. We played a good game. We pulled it out in the end.”

The Cougars were first to put points on the board with Crisp County kicker Tahjie Thompson hitting a 14-yard field goal with 11:57 left in the first quarter.

The Bearcats immediately answered during their next drive with a touchdown. Tyler ran nine yards for the score. Kicker Evan Oldaker’s extra point was blocked, a trend that would continue two more times throughout the game.

Bainbridge scored on its next two drives, the first with freshman running back Dameon Pierce running 56 yards for the score. The second was on a 17-yard pass from

Tyler to senior wide receiver Tyler Story. The Cougars kicked a field goal in between the two drives, and the Bearcats were up 18-6 with 3:52 left in the first half.

“I knew my teammates were working hard, so I had to work hard for them,” said Pierce, who had 115 yards on 11 carries for the night. “But I’m still going to continue on things and work harder.”

The third quarter was scoreless, but the Bearcats scored twice again in the fourth quarter. Senior corner back Victor Bodison intercepted a Cougar pass and helped put Bainbridge in scoring position. Five plays later, Tyler ran three yards for a Bearcat touchdown. Oldaker’s extra point was good, and Bainbridge was up 25-6.

On the Cougars’ next drive, Cervantes Jackson intercepted another pass and gave the Bearcats another opportunity to score, this time with junior running back Dalvin Spivie punching it in the end zone on a five-yard run. Oldaker’s extra point was blocked, but Bainbridge was leading 31-6 with 6:03 left in the game.

Bainbridge’s defense held strong and prevented another score from the Cougars for the remainder of the game.

“The good thing is everybody had each other’s back tonight, and when things did go bad, nobody folded, and we came together and trusted each other,” Littleton said.

The Bearcats continue their division play against Americus-Sumter next Friday at Centennial Field. Kick off is at 7:30 p.m.