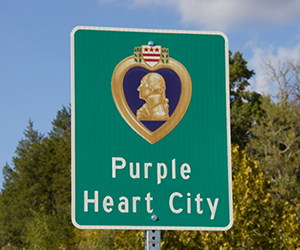 The City of Bainbridge is becoming a little more purple, but not because of the Bainbridge Bearcats. The city has been chosen to become a Purple Heart City.
The City will be recognizing and honoring all local Purple Heart recipients, both living and deceased, at the Tuesday, Oct. 21, City Council meeting in the council chambers of City Hall.
Purple Hearts are a military decoration awarded by the President to those wounded or killed while serving after April 5, 1917. It is the oldest military award still given to members of the U.S. military.
Hundreds of cities across the nation have become Purple Heart cities.
“There are a lot of veterans here who have been wounded in action,” Hobby said. “Any time you take the time to recognize those folks is a good use of time.”
Hobby said becoming a Purple Heart City is an opportunity to appreciate Bainbridge residents who have made sacrifices while serving.
City Council member Roslyn Palmer had the idea for Bainbridge to become a Purple Heart City when she saw her friend Beth English, a Vienna City Council Member, mention it on Facebook.
“I thought, oh goodness, what do we have to do,” Palmer said. She applied for Bainbridge, received the information and completed the application process. Next Tuesday at the City Council meeting, an official proclamation will be read to accept Bainbridge as a Purple Heart City.
The only cost involved is erecting a sign at the entrance to Bainbridge. Palmer said Vienna businesses chipped in to have the sign put up in their city and hopes Bainbridge businesses might consider doing the same.
“The veterans of our country, living and dead, are why we can have what we have,” Palmer said. “They fought for those rights. I just don’t want anyone else to forget.”
If you or someone you know has received a Purple Heart, please contact Allie Godwin at allieg@bainbridgecity.com or call her at (229) 248-2000 ext. 107.