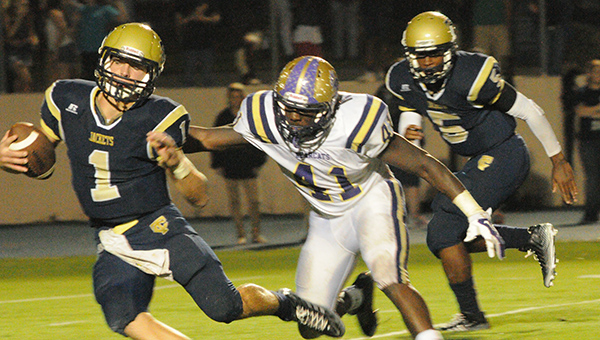 The Bainbridge Bearcats left the field at halftime Friday night at Thomas County Central ahead 10-3 and in full control of the game. The second half was a different story.

The loss sets Bainbridge at 2-2 for the season.

“We have to give Thomas County Central a lot of credit,” head coach Jeff Littleton said. “They came out and played hard and executed what they do on offense and defense. We were unable to finish in the second half.”

Despite the loss, Bainbridge’s defense was on fire for most of the night, holding the Yellow Jackets to six scoreless drives in the first half.

Bainbridge put the first points on the board when junior quarterback Elijah Tyler ran 52 yards and set up sophomore quarterback Brett McLaughin for a two-yard touchdown. Junior kicker Evan Oldaker’s kick was good and the Bearcats were leading 7-0.

The Yellow Jackets immediately answered with a 66-yard drive and a field goal, moving the score to 7-3.

TCC’s next series saw junior quarterback Eli Taylor sacked by Bainbridge’s junior defensive end Timothy Bennett for a loss of 12 yards on third down. A flubbed punt by the Yellow Jackets put Bainbridge in scoring position again, and Oldaker kicked a 33-yard field goal to raise the score 10-3 with 36 seconds left in the half.

It was the last score of the night for the Bearcats.

Tyler was 0-of-6 with one interception and a fumble that was repossessed by Central that, resulting in a field goal to put the score at 10-6 with 6:37 left in the third quarter.

“We had some good runs and some bad runs,” Tyler said. “What hurt us the most was the fumble we made and the interceptions that I threw.”

Senior defensive end Hudson Reynolds, who had had a sack for a fumble on TCC’s final drive on the first half, said he believed the team played well despite coming up short.

“It stings, but I think we fought well,” Reynolds said about the loss.

Next Friday, Bainbridge travels to Crisp County. Kickoff is scheduled for 7:30 p.m. against the Cougars.