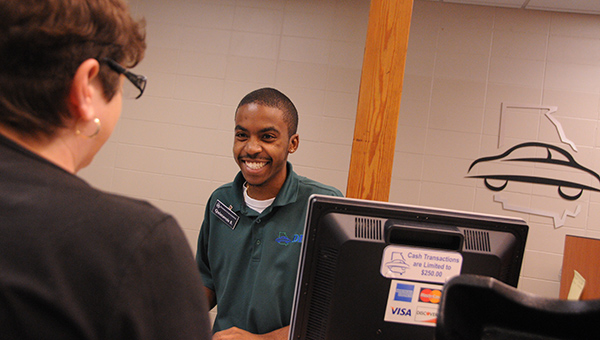 DDS counter worker Quintavois Sims smiles as he helps a customer Thursday morning. The new station has six counters and offers everything a full DDS station has to offer, from license renewals to driving tests. — Powell Cobb

Recovery resident Terry Smith left the new Department of Driver’s Services station on Dothan Highway Thursday morning with a smile on his face.

No longer will he have to drive to Colquitt for a license renewal.

“This will be more convenient for me,” Smith said.

The DDS station has been open for over a week, and already the numbers have shown promise for the new Bainbridge location.

Last week alone, it served about a hundred people a day, according to DDS Commissioner Rob Mikell.

“We’re definitely getting off on the right track and we’re excited about,” Mikell said. “We expect we’ll serve about 18,000 customers per year out of this office.”

Formerly the City of Bainbridge Convention and Visitor’s Bureau, City Manager Chris Hobby worked closely with Mikell and local legislature to renovate the building into a DDS station.

“We were able to get this idea moving because it made a lot of sense,” Hobby said. “This building was sitting here empty. A lot of our citizens had to drive a pretty good distance just to get a drivers license renewal. Everybody agreed and we made something work.”

Not only will the new DDS station drive more attention to Bainbridge from the surrounding communities, but the distance residents have to travel will be significantly reduced from all sides.

DDS also is thrilled to have the station open in such a prime location.

“From the Drivers Services side, we couldn’t be happier,” Mikell said. “This is an opportunity for us to expand into this part of the state.”

The station has six counters and provides everything a full service center has to offer, including renewals and driving tests.

The station will be open Tuesday through Friday from 8 a.m. to 6 p.m., but Mikell noted if the demand were there, more hours would be added.

“As time goes on and if the demand is what we’ve already seen, my expectation is hopefully we’ll be able to expand those services,” Mikell said.

Bainbridge DDS Manager Jessica Randall, former manager of the Colquitt station, said she was glad to be in the Bainbridge community.

“Hopefully the same people that were coming to the Colquitt office will be coming here,” Randall said. “I hope to see the same people and a little bit more and to provide excellent customer service.”