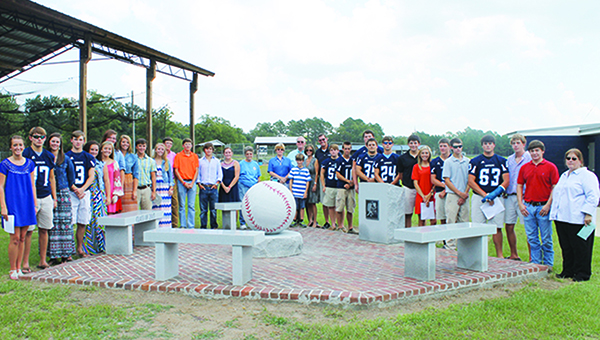 Friends and Family gather around the memorial for Matthew Jernigan at Southwest Georgia Academy. — Photo Submitted

Southwest Georgia Academy students and faculty held a dedication ceremony on Aug. 22 for the memorial built on the baseball field at the school.

The memorial honors the memory of James Matthew Jernigan, a member of last year’s junior class, who died January 7, 2014 in a boating accident on Lake Seminole.

After Matthew Jernigan’s fatal accident in January, his classmates knew they wanted to do something special for such an amazing guy. They began planning right away to do something they thought would honor what was so special to Matthew — the game of baseball.

They wanted a baseball memorial to put at the SGA baseball fields. They began fundraisers and after just a few weeks enough money had been raised to make it a reality.

Danny Doster volunteered to lay the bricks in the shape of home plate, and a team of workers began working on the benches and the baseball. The benches were purchased by each high school grade, and donations were made to purchase the granite baseball.

Matthew had a tremendous love for baseball, a game he had enjoyed from a very early age. His friend and teammate Tyler Johnson talked about Matt’s love of baseball and read a poem he had written about the love of baseball. Tanner Powell then read a poem written by Matt as a class assignment just before the Christmas holidays.

On behalf of the class Shelby Lee thanked everyone who came to the service, and expressed the fact that the class felt that a memorial on the baseball field where Matt played the game he loved would be the best way to honor their memories of him.

His family established a scholarship in his memory to be presented to an outstanding baseball player at SGA. The first of this scholarship was awarded on Honors Day in May of 2014.