The BT-15 returns to origin site at Decatur County Airport 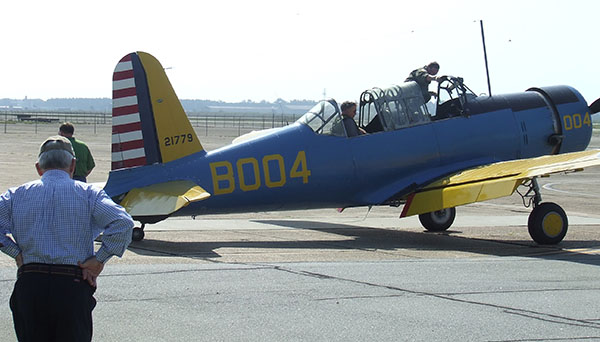 History was relived for a few hours at the Decatur County Airport on Friday, Aug. 22 when Tom Smith flew his BT-15 back to its original home.

The brand new BT-15 was first delivered to Bainbridge 72 years ago on July 19, 1942, where it was used as a World War II trainer. The 1942 delivery documents identified the location as “Lynn, Bainbridge, GA (by air).” Referring to the historic name of that area of Decatur County known as Lynn Station.

The aircraft was produced by Vultee Aircraft Inc. in California, with a total of 1693  BT-15s being manufactured between 1939 through 1943.

Smith, of Sarasota, Fla., purchased the plane a few years ago, just because it was available and he thought it would be interesting to have.

He has no air force background; flying is just a hobby, but the history of this plane is what drew him to it initially. It is one of only 15 such planes still flying.  He said he and his wife use it for little hops or weekend get-aways, and he is definitely having fun with it. “I fly it for my own enjoyment, which sometimes includes air shows,” he said. In spite of its age, Smith said it only requires routine maintenance. “It was built to last,” he added.

Several plane enthusiasts came to the airport Friday morning to see the plane, and a few were lucky enough to hitch a ride with Smith.

County Commissioner Frank Loeffler departed the plane exclaiming, “That was fun, just to know you’re flying in a 72 year-old airplane.”

Decatur County makes the claim that we have the only situation where a World War II airfield is still active, with a World War II hangar still used for aircraft storage, and a World War II BT-15 trainer that was delivered and used at the same airfield that has flown home twice — in 2010 and again in 2014.