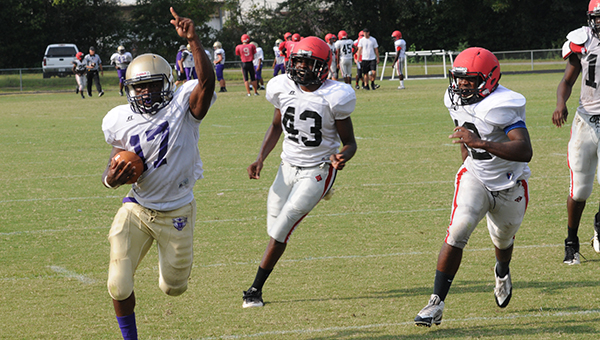 Bearcat running back Dalvin Spivie celebrates as he crosses into the endzone Friday during practice against the Cairo Syrupmakers. — Powell Cobb

Junior quarterback Elijah Tyler believes his team had a good scrimmage against the Cairo Syrupmakers Friday. Most of all, he hopes the Bearcats can beat Cairo later this season.

The Bainbridge Bearcats practiced 11 on 11 with Cairo at the Syrupmakers’ practice field for a solid two hours Friday evening, getting a feel for how the offense and defense ran against the rival team.

The practice marked the first team the Bearcats have played against since starting official fall practice two weeks ago.

Head coach Jeff Littleton said he saw his players having fun. He believes when they have fun, they play better.

“We feel like when the kids are having fun and playing with excitement, the intensity increases,” Littleton said. “We did that today.”

Despite the team making mistakes, Littleton said he was proud of the full speed and all-out effort the Bearcats brought to the field.

“Offensively we had a few turnovers and had a few big plays,” he said. “We had a lot of yards after contact, which is good. But we’re still making some stepping mistakes, not driving our feet up front and making mental mistakes, so we got to correct all that.”

In addition to playing 11 on 11, quarterbacks and receivers from both teams ran routes against each other to practice accuracy, the passing game and defense.

The practice also featured an overtime simulation that put the players in the mindset of a win or lose situation.

Tyler, the Bearcats’ answer to who will fill Preston Norris’ shoes after his senior season last year, displayed confidence behind center. Littleton shares that confidence in the team’s new quarterback.

“Elijah has gotten better with his throwing and his footwork,” Littleton said. “We know he can run. He’s speedy. He’s one of the fastest guys on our team, and that’s why he’s in that position. He’s tough and he’s a good fit for us in the quarterback with the type of offense we run.”