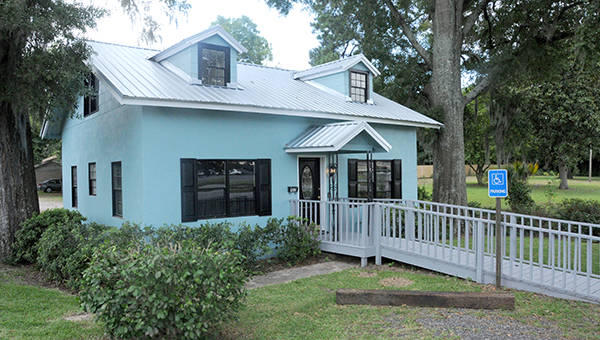 The Henry House on Shotwell Street has been repainted and fully renovated inside to make home to six businesses.

David Henry, Sr. was 33-years-old when he walked onto the 922 East Shotwell St. lot with a shovel in hand and began to dig. His project was to build a home for he and his family to live in. It was 1951.

After almost single-handedly digging out the basement, laying the concrete block, performing the wiring, plumbing and roof installation, his family moved in. It was 1953.

Now in 2014, the home has been bought and renovated after sitting on the market for 10 years by a woman who is fascinated by the house’s history and is dedicated to preserving it.

Debra Brock of Bainbridge admits she has fallen in love with the house, and after months of cleaning and decorating, she and five other businesses are ready to open its doors to the public.

The house’s structure separates each business, keeping the atmosphere serene and personal for clients who visit the home.

The upstairs of the house has been converted into an office for Brock and her husband, Derrick. After working in drafting for more than 30 years, he has taken over management for Debra T’s Janitorial Service.

Henry was a mechanic, carpenter and a general jack-of-all-trades. The majority of the doors featured upstairs are the originals Henry had crafted in the 1950s. Brock cherishes the few doors she was able to recover after they sat in the basement for years.

After returning to the southeast from the European Theater in World War II, Henry retired from the U.S. Air Force in 1963 and became a mail carrier in Bainbridge for the next 10 years.

He was an active member of First Baptist Church. He had seven children, each now grown and spread across the southeast.

Brock considers it an honor to be working from within the home and believes in keeping this piece of Bainbridge history alive.