Cougars test waters against other schools, prep for Nov. 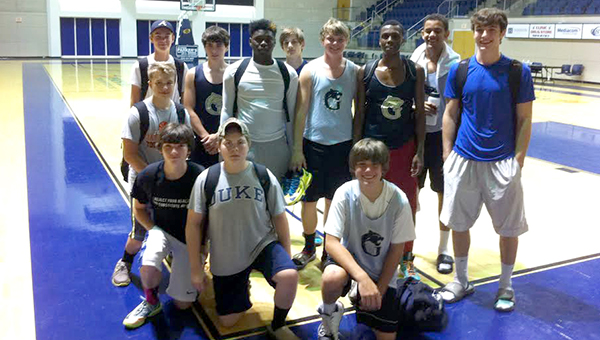 The Grace Christian Academy Cougars varsity basketball team has been hard at work this summer.

Beginning immediately after school let out in May, the 2014-15 varsity Cougars started their grind. Practicing several times per week, playing in the North Florida school ball league and attending team camp at Georgia Southwestern, the Cougars have experienced tremendous improvement already.

“I’m really proud of the way the team is shaping up this year,” Head Coach Mallory McRae said. “We’ve got some size and experience that we haven’t had in the past. Brent Warr is back this year, after being sidelined by an ACL tear at the beginning of last season. We’ve also added a couple of new players, and our guys from last year are bigger and stronger.”

Last week, the team attended the Round Ball Roundup Camp at Georgia Southwestern in Americus.

With more than 25 teams from across the state in attendance, the Cougars had the opportunity to match their play against other GISA schools.

“It was a great chance for our new guys to learn the plays, get plenty of game experience, and bond as a team,” McRae said. “We took 13 players, enough for a varsity and a b-team. Our varsity team won six of their eight games and seems to be jelling really well. I was proudest of the progress we made as a team over the course of the camp.”

The Cougars kick off their season against Maclay November 18.