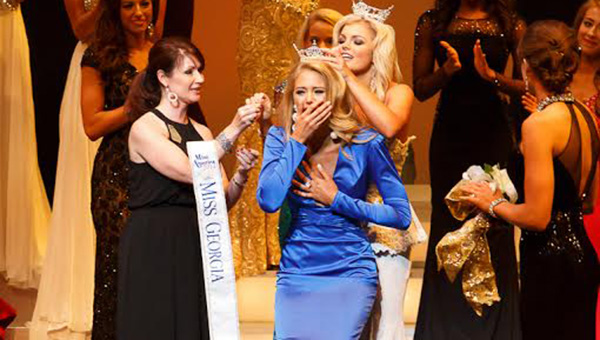 Maggie Bridges, 21, is crowned as Miss Georgia on the final day of the pageant Sunday. Bridges was born and raised in Brinson, Georgia. — Matt Boyd

Bridges, 21, will go on to represent Georgia in the 2014 Miss America pageant this September.

When she was 9-years-old, Bridges won the Little Miss Pine Seedling pageant in Decatur County, her mother, Cathy, said. She continued to participate in pageants on into her teenage years.

“I think immediately she saw the benefits of pageantry and growth, even as a child, and the things she could get to do,” Cathy said.

Last weekend, 80 young women from across the state gathered in Columbus to compete for the Miss Georgia and Miss Georgia’s Outstanding Teen titles. Contestants competed in preliminary competitions including Lifestyle and Fitness, Talent and Evening Wear leading up to the final competition.

The final two contestants left standing were Bridges and her longtime friend and college roommate Taylor Voyles. The two embraced when Bridges was named Miss Georgia.

Cathy noted the chances of walking on a Miss America stage were slimmer than a football player being recruited into the NFL.

Cathy said her daughter has learned about volunteerism and the importance of giving back. She said she has learned how to speak in front of people, which has instilled a confidence in her that Cathy believes will open more doors for Bridges in the future.

But above all, Cathy said it was about setting an example.

“The most important thing for Maggie, and the reason she wanted to try and become Miss Georgia, is because she feels like she can teach other girls and young people that it’s okay to be themselves, and nobody can be them better than they can,” Cathy said. “To set goals for themselves and go for it.”

Editor’s Note: A full feature on Maggie Bridges will appear in Saturday’s edition of The Post-Searchlight.

EMS building upgrades to be completed by August

In an effort to clean up EMS Headquarters in time for Grady EMS’s move to Decatur County in September, interim... read more