EMS building upgrades to be completed by August 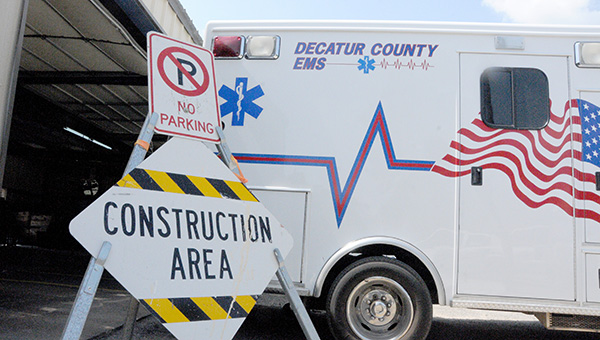 In an effort to clean up EMS Headquarters in time for Grady EMS’s move to Decatur County in September, interim EMS Director and Decatur County Prison Warden Elijah McCoy is leading the charge to renovate the building.

According to McCoy, they are on schedule to finish renovations by mid-July.

“We’re probably going to be running a week behind because we ran into some early problems, some structural problems that we didn’t anticipate, so that’s holding us up a little bit,” McCoy said. “By the first of August, we’ll be fully moved in.”

Once serving as the Decatur County Prison, the structure of the EMS Headquarters is made of concrete. Bars still cover some windows. The majority of the inside is rundown from decades of use.

McCoy’s goal is to upgrade to entire building to serve as a suitable headquarters and living space for EMS workers.

“I think coming through and tearing it down and starting fresh is good health-wise for all the people that work here,” EMS employee LaDonna Anderson said. “It’s a great improvement.”

McCoy said he and his crew were essentially tearing down everything except for the building’s concrete skeleton and renovating it to modern standards.

To help in the renovation process, McCoy has anywhere from six to 10 Decatur County prisoners providing manual labor. They work six days a week from 7:30 a.m. to 6:30 p.m.

The renovation is costing Decatur County between and estimated $20,000 to $30,000, according to McCoy.

“And that’s a high number,” he added.

Funding for the project is coming from the Public Safety section of SPLOST V, Decatur County Administrator Gary Breedlove said.

“There’s an awful lot of work done for very little money,” Breedlove said, referencing the prison labor being used for the renovations.