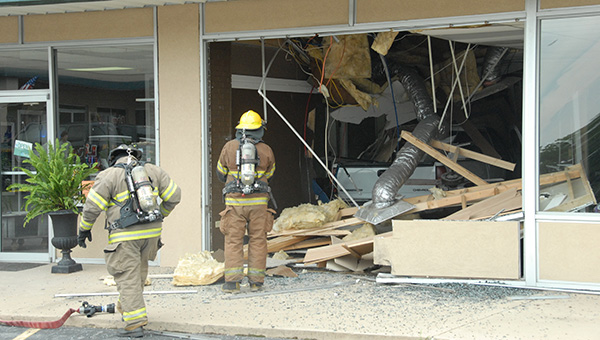 Bainbridge Public Safety firemen approach the wreckage created by a truck running through the front window of Headquarters on Scott Street. — Powell Cobb

A man driving a pickup truck drove through the front window of Headquarters Hair Salon on Scott Street around 2 p.m. Friday.

Four workers and seven customers occupied the store at the time. Nobody was injured in the accident.

“At this point, we have no reason to believe (the driver) was under the influence of alcohol,” Bainbridge Public Safety Deputy Director Frank Green said. The driver was immediately transferred to Memorial Hospital and Manor to be treated for non-life-threatening injuries after the accident.

According to witnesses, the driver jumped the curb off Scott Street and drove the truck through an open parking spot in an otherwise full parking lot. The driver continued directly into the front of Headquarters and didn’t stop until the vehicle was completely inside the building.

“The parking lot was full except for this one parking spot,” Headquarters owner Ryan Phillips said. “He had to have been going 45 miles per hour. Somebody looked up and saw him and thought he was just parking.”

Phillips said the crash sounded like an explosion of glass. Everyone in the building escaped through a backdoor, including a woman who was sitting where the truck crashed through.

“It’s surreal,” he said. “But I’m just so happy everybody is okay. Just that everyone is alright is praise-worthy.”

Customer Carlton Bryan said he had just gotten a haircut and his grandson was getting ready for one. Seconds later, the vehicle crashed inside.

“Everybody was outside,” Bryan said. “You didn’t know if it was going to catch fire or not, everybody just went out the back. It’s unbelievable.”

The case is still open to investigation.

Two Bainbridge residents look back on the Longest Day