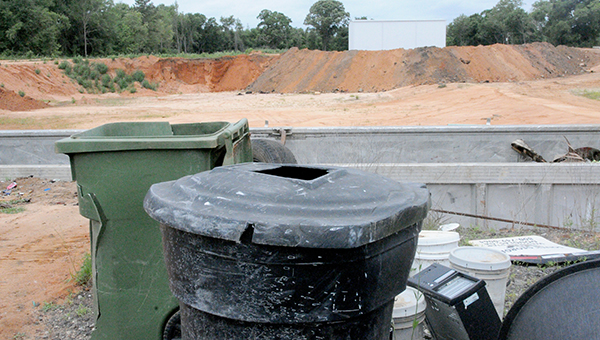 Bainbridge City Manager Chris Hobby estimates the city’s garbage transfer station being built off U.S. Highway 97 will be finished by the beginning of July. He also expects using it will save the city money in the long run.
“It will save us a significant amount of transportation and labor costs,” Hobby said. “What will happen is we’ll go from making trips with our entire fleet of garbage trucks on a daily basis to the landfill to going to—depending on volume—making nine to 11 trips a week.”
Bainbridge’s garbage will be transported via semi-truck to Waste Management, a garbage company in Campbellton, Florida. Bainbridge signed a contract with Waste Management in April.
Hobby said he originally estimated round trips to Campbellton taking 2 hours and 40 minutes. However, the trip is currently clocking in at 20 hours and 20 minutes, he said.
Last year, Bainbridge disposed of a total of 12,002 tons of garbage at the Decatur County Landfill. Hobby said he was told the semi-truck is capable of transferring 24 tons in one trip and believes if they city disposes of the same amount of garbage this year, money will be saved.
“That is the whole idea behind the transfer station,” Hobby said, noting that currently Bainbridge’s residential garbage trucks are making trips to Waste Management. “We try to cut down on the wear and tear on our trucks and also on the fuel costs and the whole thing.”
Bainbridge Public Services Director Steve Winburn said the semi-truck responsible for transporting the garbage will be making two to three trips on Mondays and Tuesday’s to Campbellton and one to two trips Wednesday through Friday.
“Monday and Tuesday are our busy days because that’s when we do our residential garbage,” Winburn said.
The process used to move trash into the semi-truck is also designed to be as cost efficient a possible, Winburn said. By removing the moisture, more weight will be taken off the truck and ease up on the wear and tear.
“It helps take out the moisture and helps reduce our fuel costs because we are just running one big truck over there that has a large capacity instead of smaller trucks that run the residential routes,” Winburn said. “That gives them more time to do what they need to do also.”
Winburn said they are on schedule to finish construction of the transfer station in four weeks, weather permitting.
“We’re excited about it and ready to get it rolling,” he said.