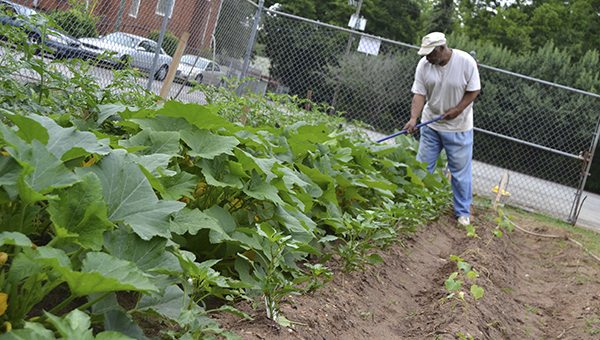 James Garner, a community garden volunteer, tends to the row of squash growing behind Nelson AME Chapel Church. The garden is being used as a way to bring the community together and feed those in need. — Ashley Johnson

Bainbridge Little Theatre Class Act children are having a blast living in wonderland this summer.
Class Act is a summer youth program of Bainbridge Little Theatre, whose purpose is to expose youth to the joys and basic elements of theatrical productions.
Hildy Conder, a veteran actor with a long history in BLT productions, a current board member, and a teacher with 21 years experience, has taken on her first venture at directing. She is ably assisted by three youth — all veterans of the BLT summer programs — Heather Phillips, now a sophomore at UGA; Stephanie Mills, a theater major at Young Harris College and Alaiya Schuyler.
This has been the first week of rehearsals for their upcoming production of Alice @ Wonderland that will be on the BLT stage June 13 and 14 at 7 p.m.
Conder said these first few days have been spent just having fun and getting acquainted with each other. They warm up each morning playing group games. Auditions were held Thursday and each youth read for four different parts.
On Friday morning, all the children were asked to sit in a circle with their eyes closed as each was given their nametag. On the reverse side was the name of the “character” they would portray. All were then told to open their eyes and turn the cards over to see who they would be. There was much excitement, as well as a few disappointed faces from those who did not get the parts they wanted. Conder explained this too is a life lesson. “We don’t always get what we want. Sometimes we just aren’t ready.”
The show is a contemporary version of the Lewis Carroll children’s classic, Alice in Wonderland. The play imagines a present day Alice, one with a cell phone she repeatedly uses for texting and social media, as she encounters the traditional Wonderland characters of the Mad Hatter, White Rabbit, Queen of Hearts and others.
Cast members include: Kathryn Cohen (Alice), Avery Andrews (Tweedledum), Brooke Phillips (Queen of Hearts), Brookelyn Wade (Tiny Door/Guard #2) Caliana Holt (King of Hearts), Coby-James Harper (Mad Hatter), Ellie Godwin (Door #2/Rose), Emellia Woodrum (Frog-newsie/Daisy), Emily Jones (Tweedledee), Emmalee Bellflower (Door #3/Guard #1), Kennedy Jackson (Humpty-dumpty), Mckenzie Wiggins (Violet), Nourah Holt (March Hare), Olivia Andrews (Caterpillar),
Paige Overman (Fish-newsie/Chorus #2), Shelby Harper (Cheshire Cat/Çhorus #1),
Taryn Powell (Chesire Cat/Door #1), Vivana Schuyler (White Rabbit), Mackenzie Vickers (Lily) and Dallis Thompson as the Dormouse.
The teen youth group (ages 13 up) will be working on “Beauty and the Beast” with performances July 18 and 19.