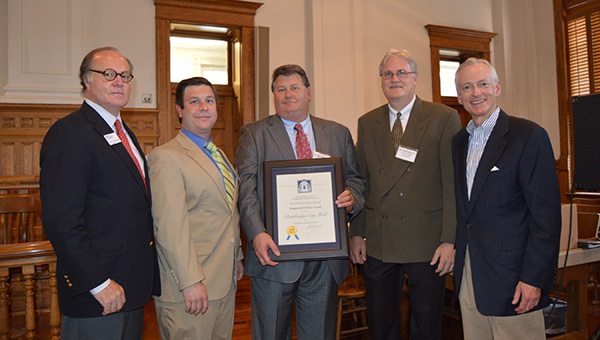 The Bainbridge Downtown Development Authority and City of Bainbridge received a coveted state award Friday when the city attended the Georgia Trust for Historic Preservation Awards in Cartersville.
The renovation of Bainbridge’s City Hall was chosen for the Excellence in Rehabilitation Award and also won the top honor — the Marguerite Williams Award.
The Marguerite Williams Award is presented annually to the project that had the greatest impact on preservation in the state. The trust presented 24 awards in total Friday, Bainbridge being the recipient of the top award. The Trust cited Bainbridge’s City Hall project as one that, “provides a compelling example of a municipality that embraced its future without demolishing its past.”
Beginning in April 2012, the City of Bainbridge began its 15-month rehabilitation of the City Hall offices. According to DDA director Amanda Glover the project cost more than $4 million and was funded through SPLOST.
Glover said the city winning the award Friday for the most impactful preservation project in the state, shows the Bainbridge mayor and council have a sense of how important it is to keep the city government located downtown.
“The mayor and council really saw the importance of preservation and keeping the local government in the downtown area,” Glover said. “City Hall really is an anchor for downtown and now that is being recognized statewide. I think this is a huge accomplishment.”
Three historic buildings built in the 1800s were merged together to create what is now the Bainbridge City Hall in the preservation project. The city took the grand marble bank building at the intersection of Broad Street and Broughton Street, as well as the Kwilecki Hardware building and Main Street Offices right next door.
Glover said the walls were torn down in the buildings and the whole space was mapped out from scratch by an architect. Now, featuring more space, the newly renovated facility proves functional by allowing visitors direct, walk-up access to utility payment departments and other departments.
“The previous building had many issues where different parts of the same floor were at different elevations,” Glover said. “The rehabilitation of City Hall has made the building fully handicapped-accessible. There are ramps, wheelchair lifts and an elevator that provide easy access.”
The city was creative in its preservation by taking floor joists from the Kwilecki building and using them as ceiling beams in the council chambers, as well as in the conference table in the Reynolds Room.
Former Bainbridge resident and artist Jim Willis was commissioned to paint local scenes throughout the renovated structure.
Mark C. McDonald, president of The Georgia Trust, said Bainbridge and other winners this year show dedication to preservation the trust needs.
“This year’s winners represent a tremendous dedication to restoring and revitalizing Georgia’s historic buildings and communities,” said Mark C. McDonald, president of The Georgia Trust.  “We are proud to honor such deserving projects and individuals.”
For more than 35 years, the Trust has recognized preservation projects and individuals throughout Georgia who have made significant contributions to the field of historic preservation. Awards are presented on the basis of the contributions of the person or project to the community and/or state and on compliance with the Secretary of the Interior’s Standards for the Treatment of Historic Properties.
Founded in 1973, the Georgia Trust for Historic Preservation is one of the country’s largest statewide, nonprofit preservation organizations. The Trust is committed to preserving and enhancing Georgia’s communities and their diverse historic resources for the education and enjoyment of all.