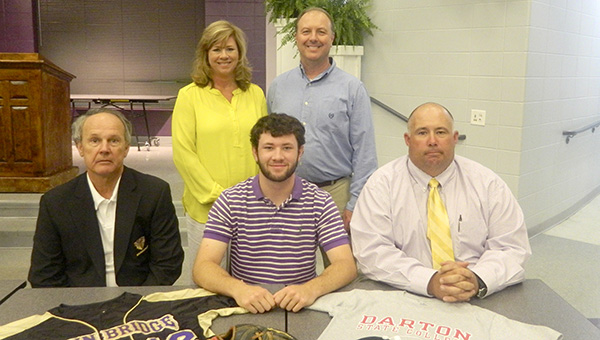 Bainbridge High School Bearcats senior captain and third baseman Grant McDonald has signed a baseball scholarship with Albany’s Darton College Cavaliers.
McDonald, who was voted team captain by his teammates, earned Hitter of the Year honors with a .384 batting average. He had a 541 on-base percentage and drove in 13 runs.
He had a game winning home run against the Cairo High School Syrupmakers. He also banged out 20 singles and six doubles. McDonald was a very aggressive base runner.
Bearcats head baseball coach Brian McCorkle said McDonald had a knack for coming up with big hits in key situations. He was also a strong defensive third baseman.
“Strong defensive plays by Grant helped cut off some potential rallies,” McCorkle said. “I am looking forward to hearing a lot of good things about him at Darton. He will be an asset to their program.”
McDonald said he was excited to play baseball at Darton State.
“A dream of mine has been to play baseball at the college level,” he said. “This is my chance. They have great facilities and coaches. Their program under Coach Scott Hemmings has really gotten strong and has become a feeder program for four-year schools.”
McDonald’s father, Greg, said he and his wife, Merreann, were proud of the accomplishments their son has made both on and off the baseball field.
“Darton has a really strong baseball program as well as being a good school academically,” Greg said. “Coach Hemmings considers a player’s education as important as his baseball skills. That’s the kind of school we were hoping Grant could play for.”
McCorkle said being voted captain by his teammates is a testament to Grant’s leadership skills.
“Darton is getting a high-quality player and young man,” he said.