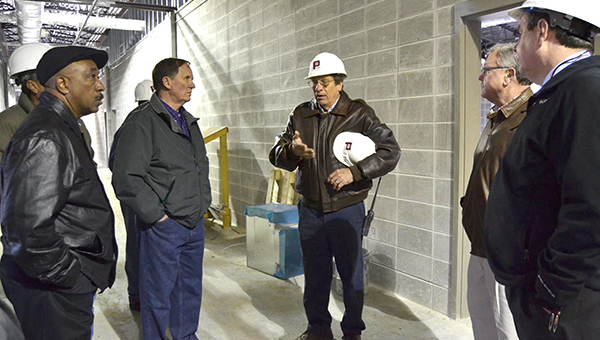 Jones Wheat Elementary will not be done by the start of school in August. Above, school board members take a tour of the school with Jerry Mills in March.

Teachers who planned on moving into the new Jones Wheat Elementary School facility this summer may be disappointed.
It was announced Thursday at the Decatur County School Board of Education meeting that construction on the school would not be complete until September and a new construction timeline was being created.
Jerry Mills, the maintenance director for Decatur County Schools said because of delays, the school will not be ready for move-in prior to school starting in August.
“It appears that we are about three weeks behind schedule,” Mills said. “At this junction we do not feel that we can make it up in the five weeks we have remaining. Reluctantly we met and made the decision to throttle back, take a deep breath and prepare for possibly a fall break entrance into the new building.”
Mills apologized and said the delay was not due to the contractors or workers, but to elements outside of their control.
Mills added that for the last five weeks there have been an excess of 500 men working on the site each day.
“It is just one of those things that didn’t come together here at the end and I cant place blame anywhere,” Mills said.
Though the school will be ready for the fall break move-in, Mills said he estimates teachers could probably start to bring in supplies in September if needed and take a, “leisurely move in,” he said.
Decatur County Schools Superintendent Dr. Fred Rayfield said he knows the timeline to get done by the initially projected July finish date was aggressive.
“I would say that that timeline has been as aggressive as it could possibly be,” Rayfield said. “It has been excellent quality of work and we are looking forward to having those students come back from fall break.”