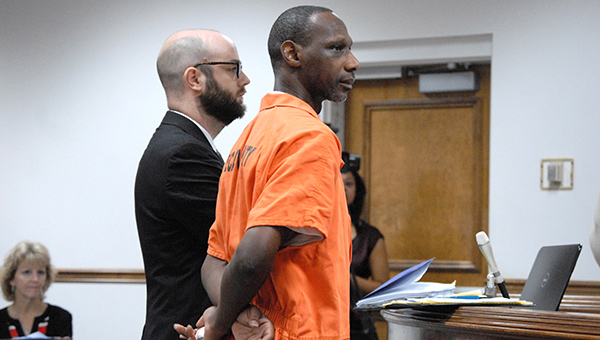 Murder suspect Michael Davis stands before the court and pleads guilty to the murder of Retha Parks. Davis received a life sentence.

Family members and friends of the late Retha Bell Parks said justice was served Tuesday morning when the man who took her life in September was sentenced to life in prison in Decatur County.

As the defendant Michael Bernard Davis, 39, approached the bench to sign a plea deal and receive life in prison Tuesday in the magistrate courtroom at the Decatur County Sheriff’s Department, loud sobs and cries came from the Park’s large family seated in the audience. Davis said he accepted the sentence and had nothing else to say.

“This was a terrible case,” District Attorney Joe Mulholland said. “Miss Parks was affectionately known by her family and friends as Retha was violently murdered on the 14th day of September, 2013, most likely when (Davis) was on drugs. He beat this woman to death after she had took him in and tried to care for him and while he was on drugs and that is how he paid her back.

“She had kicked him out recently because of his addiction and that is why he was angry with her — but she was a good mother good citizen of this community.”

Mulholland told the courtroom Davis violently wrapped a piece of concrete in a towel and hit Parks in the head before burglarizing her home.

Davis also plead guilty to charges of not only felony murder and burglary, but also necrophilia.

Parks’ family said following the sentencing Tuesday, they are hurting still from Parks’ violent murder, but are happy justice was served.

“”There are a lot of us in this family and we have always been a big family, a close family,” Barbara Jackson, Parks’ oldest daughter said surrounded by her family, said. “Her house was the house where everyone went and that is where all the family get-togethers happened. She loved to laugh and have fun and joke and tease — she didn’t have hatred in her heart for anybody.”

Jackson said Davis was like a part of the family — someone Parks took in and cared for and they are still trying to get over what he did last September.

“No, he was no stranger to us,” Jackson said. “I don’t hate him, but there is hatred in my heart … why would someone want to do that to a 63-year-old lady? We will just have to take one day at a time and have keep asking God to help us through this.”

Bainbridge soccer triumphs over Richmond Hill in first round…