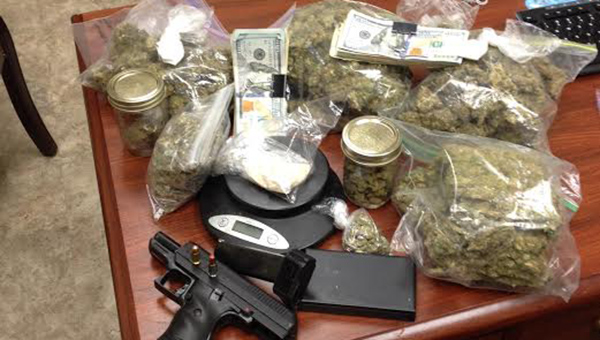 Bainbridge Public Safety arrested 22-year-old Dreon Neal Sunday, May 4 after they recovered large amounts of marijuana, cocaine and a stolen gun from his residence.
Around 9 a.m. Sunday, May 4, BPS responded to a residence on Helen Street after a 911 call was made citing a domestic altercation. Upon arrival, BPS witnessed Neal and female fighting behind the residence.
After talking to both parties, officers discovered that the female was upset with Neal and had thrown some of his marijuana in the yard. Officers found the marijuana that had been thrown out and arrested Neal.
The female gave officers consent to search the residence, where they found over four pounds of marijuana, confiscation scales, cocaine powder, crack cocaine and a stolen pistol.
The pistol was reported back in January and stolen from the somewhere in the county,” BPS Investigator Chip Nix said. “That’s currently under investigation.”
Officers arrested Neal and charged him with numerous counts including receiving stolen property, possession of cocaine, possession of marijuana with intent to distribute and disorderly conduct.
“We’re also looking into charges of reckless endangerment because there were kids in the house where the drugs were,” BPS Investigator Chip Nix said.
Nix also said while Neal wasn’t a major dealer in the community yet, he was on his way to becoming one. This was his first offense.