Bainbridge soccer triumphs over Richmond Hill in first round of playoffs 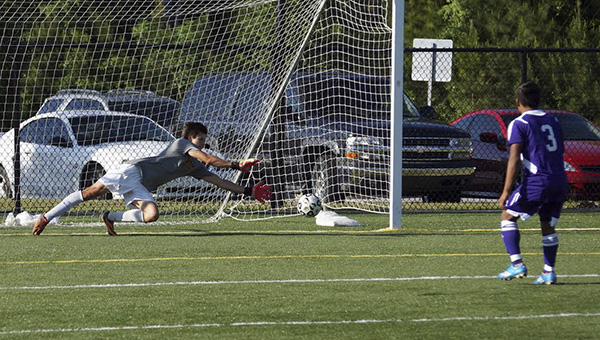 Emilio Hernandez’s shootout penalty kick got by Richmond Hill goalkeeper Joel Heiser’s diving attempt for a save to give Bainbridge a 2-1 win in overtime last Saturday. — Jamie Parker/Bryan County Now

With five minutes left in regulation and Bainbridge down 1-0, freshman forward Leroy Rivera took a pass from Luis Mejia, dribbled past the Richmond Hill goalkeeper and put the ball in the left corner of the net to tie the Bearcats 1-1 with the Wildcats in the first round of Class AAAAA state playoffs.

Bainbridge and Richmond Hill continued into overtime, both taking shots but none making it through for a score. After two overtimes, the game was forced into a shootout.

With shootout scores tied 2-2, junior forward Emilio Hernandez took a penalty kick that sent the ball to the bottom right corner of the net, just past a diving Wildcat goalkeeper and pushing the Bearcats through to a 2-1 victory.

The Wildcats controlled the majority of the game’s regulation time, shutting down what few offensive attempts the Bearcats managed to get off.

“I would say for more than three-fourths of the game, they had possession of the ball,” Bainbridge coach Mike Lewis said. “They got off an unbelievable amount of shots. They had some really high-quality skill players.”

“Everybody played,” Lewis said. “It was one of those games where everybody came in and provided quality minutes, whether they’re starters or bench players. Our team did the job. Everybody was prepared.”

Richmond Hill’s one goal came with just under seven minutes remaining in the first half. Nathan Skaggs sent a shot from 30 yards out past Douglas.

The Bearcats play in the second round of class AAAAA state playoffs Tuesday against Greenbrier High School in Augusta at 5:30 p.m.