Provence signs off to LaGrange College 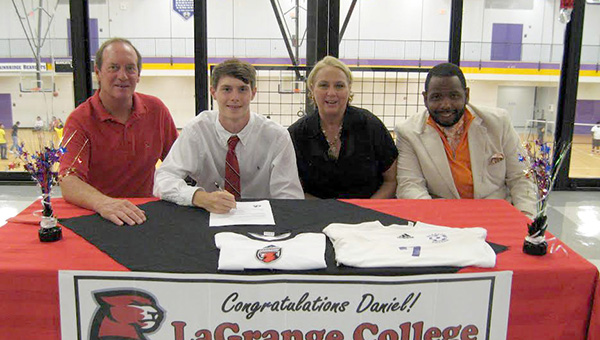 He’s been playing all his life and he isn’t slowing down now.

Provence, a mid-fielder, said LaGrange had a program he believed could win championships and wanted to be a part of it.

“The program is turning around there, they have the nicest field and facilities as anybody in the conference,” Provence said. “The coach that just got there is great. I really just want to win championships.

Provence will be playing at LaGrange with another senior Bearcat, Jim Whitehead, who signed to the college last week. The two plan on rooming together.

Provence started on the Bainbridge varsity team all four years of high school. As a freshman, he scored eight goals and had five assists.

As a sophomore, he moved positions to a forward and scored 16 goals and had nine assists. He was also selected for the Southwest Georgia All-Star game that year. As a junior, Provence moved back to mid-field and had eight goals and eight assists, and also made first team all-region and first team all-area. This year, he’s had seven goals and six assists.

“I’m glad he’s getting that opportunity, because he has so much time and energy put into it at this point,” Dan, Provence’s father and soccer coach said. “All that time and trips back and forth to practice, wherever it was, just took a lot of time and effort and investment.”

Dan said it was a great thing for his son to be able to play college athletics and continue his education at the same time.

Varsity soccer coach Mike Lewis said he’s known Provence for years and even remembers attending some of his games as a kid.

“Me and Daniel go way back,” Lewis said. “It’s always a pleasure when you can see young kids you know since a young age, and development and maturity sets in and you see the development of everything.”

Lewis said Provence was a very “complete” soccer player, and while he had a handle on the technical aspect of the game, his goal as a coach was shaping Provence into a leader.

Provence said he wanted to thank everyone who has helped him get to this point in his soccer career.