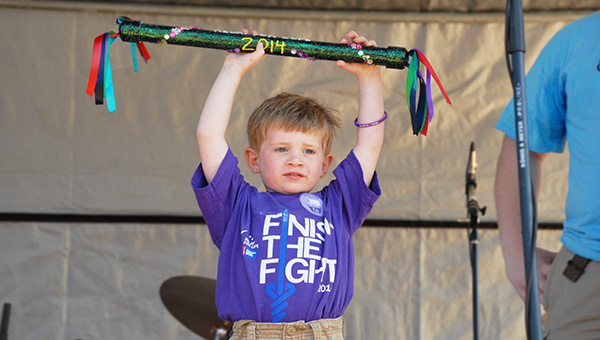 Four-year-old Knox Bridges raises the Relay for Life spirit stick above his head in front of a crowd Saturday at Bainbridge Middle School.

Hundreds of Bainbridge and Decatur County residents turned out to Finish the Fight for cancer Saturday during The Relay for Life of Decatur County’s annual fundraiser and main event.
Officials with the local Relay chapter said they are, “in the purple,” after Saturday’s relay, which is Relay lingo meaning they made their fundraising goal.
“We had a great event and we could not have asked for better weather even though it was really hot,” Lacey Addison, Relay chairman said. “Our overall goal was to raise $67,000 and as of Saturday we had $77,305.”
Addison said that is not the final fundraising number, but she expects more to come in after all teams have paid and expenses have been subtracted out. But Addison estimates that at the end, they will still be at least $10,000 over their goal.
There were 36 teams that participated in Saturday’s event which raised money for cancer research and helps fund local cancer support groups.
Five-year-old Knox Bridges charged the way at the opening ceremonies Saturday, as he led the more than 100 survivors around the Bainbridge Middle School track holding the 2014 spirit stick.
Bridges was diagnosed with cancer at the age of one and has been cancer free for several years. Bridges told the crowd Saturday over the sound system that he was, “a miracle of God.”
“He was so proud to have taken the spirit stick around and so proud to get to talk in the microphone,” Addison said. “People were talking about him all day.”
Jones Wheat Elementary School won the spirit stick to take back to the school because of their tent, themed after Disney’s movie, “Brave.” Bainbridge Church of Christ won the road to recovery, cardboard car race.
More than 500 volunteers turned out for the luminary ceremony, raising hundreds for the remembrance of those who lost their battles with cancer.
Addison said that was one of the highest attended luminary ceremonies she has witnessed.
“We just cannot say thank you enough to all of our supporters, volunteers and sponsors,” Addison said.